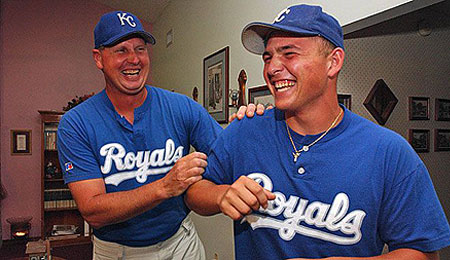 Well, I almost didn’t get this article in with the Danny Granger interview and the rest of the stuff going on over the last week. I have been asked to dig a little deeper into my bag of tricks to give you guys some names to look at in, say, 14-team leagues. Well, let’s see if I can give you a little sum’n sum’n here!

Dave Roberts: Okay, this is nothing more than a steals guy who can maybe provide some assistance in runs as well. Roberts is the one-dimensional guy that you take and play in the OF to do nothing else but steal bases and keep the BA around .290. If you punted steals at the start of the season, this doesn’t help you much. But, if you are a middle of the pack team and are trailing in steals, Roberts is on a lot of FA lists and could help you sneak up the standings without giving up anything in a trade.

Billy Butler: Now, I pretty much refuse to recommend a Royal when talking fantasy baseball — they just have a way of sucking from top to bottom! But, Butler is going to get the starts at 1B against lefties and DH against righties. That means when Mike Sweeney gets back, Ryan Shealy is going to be on the losing end of the AB train. If you need someone to sick in your DH or 1B slot, or have Shealy right now sitting on your DL hoping for him to get back, I’d go get Butler instead. Over the past month, he is hitting .384 with 13 runs, three home runs, and 21 RBI. He is a very servicable asset right now.

Coco Crisp: Trust me, Crisp was available in more than just one league. He’s an injury risk, but I like the way he is swinging the bat since he’s been back and I think he is ready for a good second half run. Take a look and see if he is there; drop someone you aren’t playing anyway. Anyone hitting .309 over the past month with 13 runs, one home run, 12 RBI, and who can chip in with four steals is worth your time.

Buddy Carlyle: As I am writing this, Carlyle has thrown 5 2/3 innings and given up three runs. If you need an ace, he isn’t your guy. But, if you are the sucker that still has Chris Carpenter, give Carlyle a look. He is not bad for a short-term run if you need strikeouts and don’t want B.H. Kim to crash your ERA stats. Carlyle should net you a handful of wins and will still keep your ERA and WHIP respectable.

Were these names a little more obscure for you readers? I know Crisp is a household name, but he really is available in more than a couple of my leagues. And, since Roberts is really one dimensional, he is available in most leagues. Butler should be someone that can stick around for a second half run, while Carlyle is a hold-until-he-folds guy.

By James Morris
Tags: Billy Butler, Kansas City Royals
This entry was posted on Sunday, July 22nd, 2007 at 11:57 am and is filed under BASEBALL, The Wire Troll. You can follow any responses to this entry through the RSS 2.0 feed. Both comments and pings are currently closed.