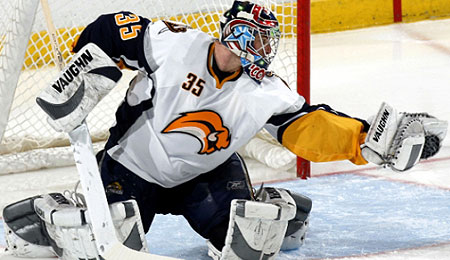 Ty Conklin has an uphill battle in his quest to be the Penguins’ back-up goalie.

By signing veteran goaltender Ty Conklin, the Pittsburgh Penguins have given themselves options behind entrenched starter Marc-Andre Fleury.

Conklin will compete with Dany Sabourin for the back-up gig, and while he has more experience than Sabourin, Sabourin is the clear favourite to win this battle because his contract is a one-way deal, meaning he’ll earn $1.025 million whether he’s in Pittsburgh or not.

So you can imagine that it’s going to take either an injury, a complete disintegration by Sabourin or a simply unbelievable showing by Conklin in training camp for Conklin to break camp with the team.

It’s more likely that Conklin will be most valuable as a veteran presence who can help some of the system’s younger goalies adjust to the pros.

The 31-year-old split 2006-07 between Columbus and Buffalo, recording a 3.34 GAA in 16 games, the worst showing of his four NHL seasons. Conklin was only 3-5-1, but his combined save percentage of almost .900 was actually an improvement over his final season in Edmonton.

Conklin is probably best remembered for his stickhandling blunder in Game One of the 2006 Stanley Cup Finals that cost the Oilers the game and helped expedite his departure from Edmonton. We doubt the ashes of his burning in effigy have cooled yet in Edmonton.

However, it’s not as if Conklin didn’t have some success with the organization. Two year after the Oilers signed him as an undrafted free agent out of the University of New Hampshire, he helped guide the Hamilton Bulldogs to the Calder Cup Finals in 2003. The Pens will probably be pretty happy if Conklin can duplicate that feat in Scranton/Wilkes-Barre this season.

By RotoRob
This entry was posted on Saturday, July 21st, 2007 at 11:35 am and is filed under HOCKEY, Transactional analysis. You can follow any responses to this entry through the RSS 2.0 feed. Both comments and pings are currently closed.