Dear RotoRob: You Gotta Have Hart 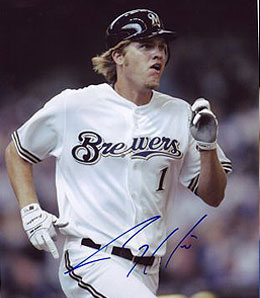 You’ll want to have surging Corey Hart active against the Cards next week.

Dear RotoRob.com (Savior of the season),

So here is my question: Lowell, Pudge, Hart…which guy should I stick in UTL spot? Should I keep rotating them or just pick one guy and go with it?

Over the past month, Hart has been on fire, going 32-for-108 (.296) with 26 runs scored, seven home runs, 18 RBI, and six stolen bases. I’d say play him until he cools off a bit. But, also look at the week’s upcoming match-ups to see how favourable it is to play him.

Lowell is playing Tampa and Baltimore coming up, so that is a favorable play there.

Hart has St. Louis, the Mets, and Philly coming up, so that could be a bit of a problem there (although note that the Phils have given up more runs than any NL team).

Pudge has the White Sox and A’s coming up, but in the middle of that he has the Angels.

I’d play Hart against the Cards, Pudge against the White Sox and A’s, then Lowell from Friday July 27 to Thursday August 2. For the utility guy, you can play the match-ups. Or, just stick with whoever is hot at that moment. Don’t have someone set in stone at the UTL spot because that is a flex position. You can put the hottest guy available in there regardless of position. Detailed enough for you?

By James Morris
This entry was posted on Friday, July 20th, 2007 at 1:26 pm and is filed under BASEBALL, Dear RotoRob. You can follow any responses to this entry through the RSS 2.0 feed. You can leave a response, or trackback from your own site.