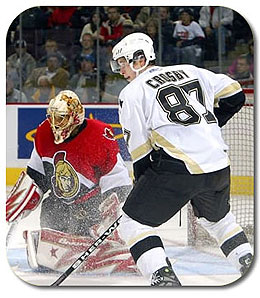 Sidney Crosby will remain property of the Penguins until 2013.

Imagine being four weeks shy of your 20th birthday and handed over $40 million to play a game you’ve loved your whole life. Oh, did I mention that you’ve already got an MVP Award and scoring title under your belt?

Crosby signed an extension with the Penguins that will keep him in Steel City until 2013.

He finishes his three-year, entry-level contract this coming season and then the $43.5-million, five-year extension will come into effect. Yes, for the math geniuses at home, the average annual salary of the extension works out to $8.7 million, and yes, that matches his uni number (which of course, matches his birthday of 8/7/87).

Believe it or not, Crosby could have done better. In accepting a deal less than the maximum allowed ($10.06 million per year based on a maximum of 20 per cent of the team’s payroll cap, which is $50.3 million for the upcoming season), Crosby has allowed the Penguins a better opportunity of retaining its core players. Before long the Pens will need to re-sign Evgeni Malkin and Jordan Staal, and thanks to Crosby, they’ll have a better chance of doing so.

This Penguins club is very close to taking a kick at the Cup over the next, say, two-to-four years, but keeping their talent in-house in vital for this quest. Just ask Buffalo about that.

All athletes say they care about winning. Crosby could have got his max deal and no one would have begrudged him – he damn well deserves it. But instead, he proved his ultimate goal is the Stanley Cup by doing his part to help Pittsburgh maintain its nucleus for a bit longer.

So how did he celebrate the news? Las Vegas bender? New York whirlwind? Uh, no. Try at home with his family in Cole Harbour, Nova Scotia. Apparently, this kid really is that genuine and down to earth. Damn, he still rents a room at Mario Lemieux’s house during the season. Imagine if the NFL had a role model like that.

This is the game’s best player. With his 120 points last season, Crosby was the youngest player in NHL history to win a scoring title. How about becoming the youngest MVP since Wayne Gretzky won the Hart in 1980? Is there anyone that still believes the comparisons are unworthy?

By the way, Crosby started skating again Monday and said he felt good. Remember that he finished last season while playing on a broken foot.

By RotoRob
This entry was posted on Wednesday, July 11th, 2007 at 12:16 pm and is filed under HOCKEY, Transactional analysis. You can follow any responses to this entry through the RSS 2.0 feed. You can leave a response, or trackback from your own site.