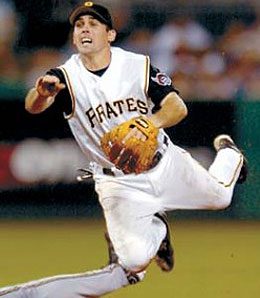 Jack Wilson isn’t exactly tearing it up, but at least he’s faring better than Mike Jacobs.

Here’s a simple one: Mike Jacobs or Jack Wilson?

Oh man, do I have to pick one? If I must, I would have to run with Wilson. Over the past month he has been in the top 350 in terms of major league rankings, whereas Jacobs is around 975. Yes, as sad as it sounds, I’m going to go ahead and give the nod the number eight hitter for the Pirates.

By James Morris
This entry was posted on Monday, July 9th, 2007 at 3:06 pm and is filed under BASEBALL, Dear RotoRob. You can follow any responses to this entry through the RSS 2.0 feed. You can leave a response, or trackback from your own site.