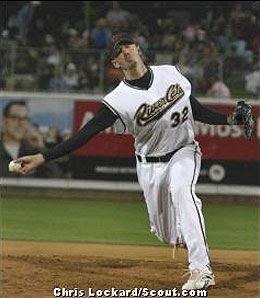 Now, everyone wants to get up close and personal with a professional baseball player, right? We all want to shake their hands and have a little chat with them, right? Are they like me and you? Do they put on their pants one leg at a time or do they hop right in with both feet? Luckily for me I actually know one of the Oakland A’s Triple-A pitchers.

Brad Ziegler and I have played in a Diamond Mind league together for about three years now. When he was in town last year with the Sacramento Rivercats, we met up after a game for some dinner. For any of you that don’t know who he is, I suggest you look him up and get on the ball. I wasn’t sure what to think of him when I first met him at the stadium. But, all in all, I must say that it is refreshing to know that there are still pro players that love the game, respect the fans, and don’t mind signing a ball for a little kid that came to the game.

I had a chance to ask Brad to answer some questions about fantasy sports, his career and the realities of playing minor league baseball and here’s what he had to say:

RotoRob.com: How many years have you been playing fantasy sports?

BZ: About eight years, since I was a freshman in college. And let me make it known that the fantasy baseball leagues I’m in are totally free – no entry fees and no prize money.

Do you play any other fantasy sports besides baseball?

Football. Oh, and the NCAA bracket challenge, one of the free ones.

Do you approach a draft differently than other fantasy players would?

Not really. People who follow the game enough will know what I know. Maybe I played with a guy in the minors, and I think he might be overrated. Sometimes magazines overhype a player, and I try to avoid him. Not to say I am always right, but I’m not always wrong, either. I also may avoid a guy because of his personality from time-to-time. I like to have guys on my teams that I like. Some people will pick whoever because they are in it to win it. Others will not take a Red Sox player because they are diehard Yankees fans. I am like that

By James Morris
Tags: Brad Ziegler, Oakland Athletics
This entry was posted on Sunday, July 8th, 2007 at 12:46 pm and is filed under BASEBALL, Interview. You can follow any responses to this entry through the RSS 2.0 feed. Both comments and pings are currently closed.