Braves Hanging Around Despite Skid 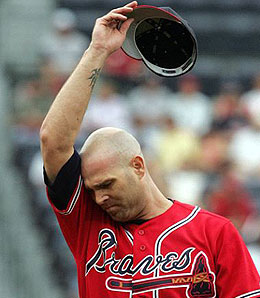 After emitting a rather odious waft last season, Tim Hudson’s rebound this year has been one of the bright spots for Atlanta’s rotation.

When assessing the 2007 Atlanta Braves, do we focus on the fact that their record is better this season, that they have a fairly strong offense and that, despite a poor, just-completed road trip (2-4) and overall 5-10 skid, they are still very much in the NL East race?

Or do we look at yesterday’s loss as just another failed opportunity, see the upcoming schedule and cringe, knowing that this skid is far from over, and do we accept the fact that this team is a slightly overachieving squad with a weak rotation that’s a John Smoltz injury away from being horrible?

Is the glass half full or half empty?

Well, for starters, a 37-33 record, while ‘ as Chipper Jones points out ‘ is never going to be confused as championship-calibre (and he knows a thing or two about teams of that ilk), it has to be construed as progress after the Braves struggled through a frustrating 79-win season in 2006 as their reign finally came to an end.

The fact that the Mets are not doing the expected and running away with the NL East is definitely helping to fan the flames of hope in Atlanta. In fact, New York is mired in a 3-12 slump ‘ virtually egging Atlanta on to go ahead and take control of the division.

Well, the Braves haven’t exactly answered the call, yet still, they sit just a mere game and a half off the pace. With Philly just a half-game behind Atlanta, this division is very much a going concern and looks like it will remain as such for the foreseeable future.

The Braves are coming home now, and that usually means the start of something good’except, of course, when Boston and Detroit are on tap.

To make matters worse, Braves nemesis Curt Schilling toes the rubber tonight, he of the 6-1 mark with a 1.98 ERA and two complete games over his last eight starts at Turner Field. Overall, Schilling is 10-3, 2.47 in 18 starts against Atlanta since 1998, and judging by the fact he’s been much better away from Fenway this season, the Braves have their hands full tonight. It’s not exactly the way to kick off a critical nine-game homestand.

Of course, at a combined one game over .500 the past two seasons, home hasn’t exactly been a safe haven for the Braves.

Sunday afternoon’s 5-2 loss to the Tribe denied the Braves a chance to earn a rare interleague road sweep (it’s been almost five years since they’ve turned the trick), a feat that would have been all the more encouraging coming in Cleveland, winners of 21 of 29 home games before this series.

Can Atlanta shake off this lost opportunity (a win would have pulled it within a half game of the Mets, who again lost to the Yankees last night) and try to avenge dropping two of three in Boston last month?

It won’t be easy given the difficulty the Braves have had against AL teams in general (3-6 interleague record this season) and the BoSox in particular (six losses in last seven games).

Let’s examine some of the issues facing Atlanta this season, starting with the challenges this team faces in trying to get back in the postseason after last year’s debacle and in putting the brakes on an organizational slide that has seen the club slip from 101 wins in 2003 to 96 in ’04, 90 in ’05 and just 79 last year. At their current pace, the Braves are headed for 85 or 86 wins, which would put them right in the thick of the Wild Card race if things play out like they did last season when the Padres earned the final post-season spot based on 88 wins.

Only a few NL teams have a worse mark than the collective 4.58 ERA Atlanta’s starters have compiled. While the bullpen has been solid (3.59 ERA, third best in NL), the starters ‘ beyond Smoltz and Tim Hudson that is ‘ have been substandard.

Chuck James, unable to build on a very fine rookie season, has been way too hittable. He looked to be settling down lately until getting bitch slapped by the Twins his last time out and doesn’t look like a safe bet to activate against the Sox tonight.

Kyle Davies pitched decently Sunday, but he’s been too inconsistent to rely on for fantasy purposes. He’s doing a better job of keeping the ball in the park this season, but what happened to his strikeout rate? Just 5.65 Ks per nine is not what I’m seeking from my starting pitcher. I still very much like Davies’ future prospects, but he shouldn’t be the fourth starter at this stage is his career, and the fact that he is speaks volumes about the Braves’ depth problems on the mound ‘ rare footage indeed for this organization.

The fifth starter spot has been an ongoing issue. An injury to Mike Hampton forced the Braves to sign Mark Redman in spring training, and after five disastrous starts, he was sent packing. Lance Cormier was shellacked in his two starts earlier this month; in May, Anthony Lerew failed to gain traction in three tries despite a solid debut.

Now the Braves have turned to Buddy Carlyle ‘ who last appeared in the majors in 2005 and entered this season with one career victory to his credit (which he earned as a rookie in 1999) ‘ and he’s been surprisingly good. His track record doesn’t suggest that will last long, but he’s helping keep the club in ballgames now, and that’s all you can ask out of your fifth man. Of course, that doesn’t mean I want him active on Wednesday in the series finale against David Ortiz and the rest of the Sox. Ortiz has spent the past couple of years doing against Atlanta what he generally does to everyone, i.e., mashing. In 10 games since 2005, Big Papi has touched up Braves pitching for two dingers, five RBI and 10 runs in nine games. On the plus side for Atlanta, Boston will likely have to sit one of Ortiz, Kevin Youkilis and Mike Lowell for each game with the series in an NL park.

Other items of concern:

By RotoRob
This entry was posted on Monday, June 18th, 2007 at 2:37 pm and is filed under BASEBALL, RotoRob, Team report. You can follow any responses to this entry through the RSS 2.0 feed. You can skip to the end and leave a response. Pinging is currently not allowed.