Dear RotoRob: Is Z-Bo on the Move? 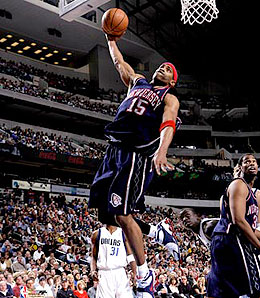 The Nets have to decide what to do with Vince Carter before dealing RJ.

Dear RotoRob.com,
‘
I have a couple of questions for you: What do you think are the chances of the Nets getting Zach Randolph for a package centred around RJ?’Going into the draft, I was expecting Boston or Memphis to get number one, so I was thinking of either Pau Gasol or Big Al, but Zach would still be a great fit for the Nets. Plus I think RJ would be a great fit for Portland as well (both on and off the court).’For the Nets, they would get’a solid post player that can run and he’d be on a veteran team that won’t stand for his antics’well, except for maybe Uncle Cliffy (pass some of that over here, Zach).’

Second question: do you think Golden State can and should make a run for KG, or do you think it’s more likely to go for J.O.?’KG and J-Kidd are two of my favorite players along with LBJ and I hope they get a chance at glory before they go past their respective primes.
‘
Anyways, always enjoy your columns, more power to you!

The Nets are talking about trying to re-sign Vince Carter and packaging RJ for a possible big man. Do I see the Trailblazers dumping Randolph off for another SF? No. The Trailblazers have the chance to have twin towers in Portland with Randolph and Greg Oden. I think they will give Randolph another season to prove himself and see what they have in him and Oden before letting him go.

The Warriors had a team payroll of a little over $65 million. Who are they going to give up to get KG? Jason Richardson only makes $11.1 million. Baron Davis makes $16.4 million. The next best player makes $6.6 million (Stephen Jackson). Are you going to give up both Davis and Richardson for KG and be right back where the T-Wolves are now with KG and nothing else around him?

I hear a lot about Garnett being dealt this offseason, but I won’t believe it until I see it. He just makes too much money (No. 1 in the NBA followed by Allan Houston at $20.7 million and Michael Finley at $20.1 million ‘ talk about two overpaid stiffs — one is retired, one ought to be). Making the salaries match is going to kill whatever team tries to trade for him and he will be right back to where he is right now. Unless you are the Knicks and the Wolves want Starbury or Steve Francis back in return, it’s just not financially possible really.

By James Morris
This entry was posted on Saturday, June 2nd, 2007 at 4:53 pm and is filed under BASKETBALL, Dear RotoRob, James Morris. You can follow any responses to this entry through the RSS 2.0 feed. You can leave a response, or trackback from your own site.