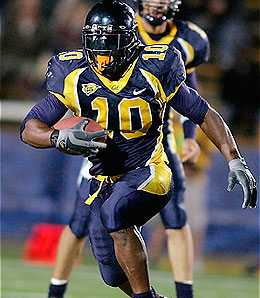 What’s this? A feature about Marshawn Lynch that barely mentions the Bills’ new running back? Oh, the irony.

Willis McGahee is the sort of ironic story that literature students strive to think up. The 2002 season was an incredible, record-setting year for McGahee. He ran for over 1,700 yards and racked up 28 touchdowns. Ironically, he wasn’t even supposed to start that season. Frank Gore was slated to be the top guy, but an ACL injury to the future 49er made McGahee the starter.

Of course, the story doesn’t quite end there. In the fourth quarter of the BCS Championship game that season, we all know what happened to McGahee. More specifically, we know what happened to his knee. It was catastrophic and ironic all at once. Most McGahee videos you’ll find on YouTube are of the injury, a fact which has a certain irony to it in its own right.

The Buffalo Bills didn’t really seem to mind that McGahee was questionable to ever play again or that they had a running back — Travis Henry — who was establishing himself as a top NFL back and had missed only one game in the previous two seasons. They McGahee in the first round, allowed him to take a year to recover and inserted him as a starter when, you guessed it, Henry went down with a rib injury.

McGahee finished 2004 with 1,128 yards and 13 touchdowns in essentially 12 games. Going into the next season, fantasy owners had the former Hurricane pegged as a top five selection. In fact, some experts put him as high as the third slot. And after McGahee had 790 yards, four touchdowns, and four 100-yard games in the first half of the season, no one questioned how high he went.

It was after that eighth game that McGahee made the curious claim that he was the best running back in the league. Aside from the obvious fact that he wasn’t, if we were to at least give him the benefit of the doubt that he meant ‘one of the best,’ this is ironically, precisely the moment he stopped being in the club.

Between making that statement and the last game he played in Buffalo (22 contests), McGahee only had three 100-yard games and seven touchdowns. This past offseason, McGahee dissed the city of Buffalo, got himself run out of town, and joined the Baltimore Ravens.

So you’re sitting there saying you thought this was a draft preview on Marshawn Lynch and wondering why anyone cares about McGahee at this time. That’s the point. There is a story that’s in the process of being written and the author relishes irony. Lynch is just a new character that’s being introduced in the climactic third act. And if this story ends as well as it’s begun, Lynch will be one of the best running backs in the league and the Bills will win the Super Bowl. That or Travis Henry regains his elite status and the Broncos hoist the Lombardi trophy.

By Andy Goldstein
Tags: NFL Draft
This entry was posted on Monday, May 28th, 2007 at 6:32 am and is filed under Andy Goldstein, Draft report, FOOTBALL. You can follow any responses to this entry through the RSS 2.0 feed. Both comments and pings are currently closed.