The Wire Troll: Could You Be Had? 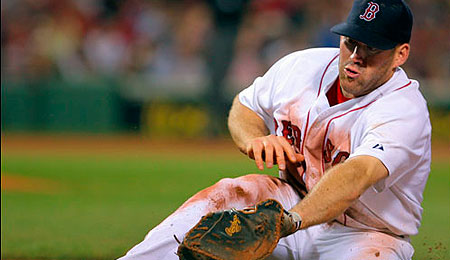 Kevin Youkilis has been flawless in the field, but his work at the plate has created even more excitement.

Okay, so this is going to be a short one since I am on vacation and the wife is beaming me down as we speak. Let’s just get to the nitty gritty…

OF/1B/3B Kevin Youkilis, Boston: Not that it is a secret that he is red hot right now, but I saw he was available in one of my leagues so I snatched him up! Over the last month, Youkilis is 43-for-104 for a .413 BA, scoring 22 runs, adding five HRs, and producing 20 RBI. Now that he is getting regular playing time, Youk is showing he has the skills to stick in the majors for a very long time. As we noted a couple of weeks ago, he has been crushing everything lately.

SP Oliver P’rez, New York Mets: I’ve been burned by the little orphan Oliver before, but Perez has been impressive over the last month. While throwing 40 1/3 innings, he has managed to rack up four wins, 36 strikeouts, a 2.23 ERA, and a 0.94 WHIP. Not that I am going to take yet another chance on Oli, but you could do worse if you want a replacement SP.

RP Jos’ Valverde, Arizona: If you need a closer and Valverde is either available or on the market, give him a look. He has 10 saves in the last month, and that is enough to tie him with J.J. Putz for the most in the majors over the past month. Give him a look; he may not be pretty, but he gets the saves.

RotoRob here to throw one more name at you. Did you happen to catch the line that Mark Reynolds put up last night? How does 5-for-5 with two homers and a triple, four runs and four RBI grab you? Interested? I bet. With Chad Tracy still out for several more days, Reynolds looks like an excellent short-term pickup for the coming week. Beyond that is anyone’s guess, but through his first 10 games, the 23-year-old is batting .459 with 10 runs and eight extra-base hits good for 11 RBI. If he’s out there on your waiver wire, you might want to wrap up this Reynolds pronto.

By James Morris
Tags: Kevin Youkilis
This entry was posted on Saturday, May 26th, 2007 at 2:15 am and is filed under BASEBALL, James Morris, The Wire Troll. You can follow any responses to this entry through the RSS 2.0 feed. Both comments and pings are currently closed.