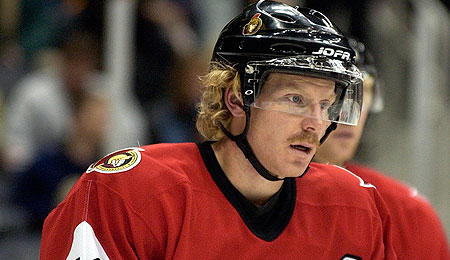 Daniel Alfredsson has exorcised plenty of playoff demons already, but the best may be yet to come.

At the start of the season, I don’t think anyone would have predicted this match-up for the Stanley Cup final. Sure, a lot of pundit-types picked the Ducks (hell, I did), including The Hockey News in its annual yearbook. Out of the East, hardly anyone called Ottawa a Cup contender. They lost Zdeno Chara and Martin Havlat, and no one trusted Ray Emery in goal.

Well, what the hell do we know? In Ottawa, the Sens have all the makings of a team of destiny. Daniel Alfredsson is exorcising plenty of past demons right now, the shut-down unit of Anton Volchenkov and Chris Phillips has handled everyone from Sidney Crosby to Chris Drury, and Emery is becoming a local legend. Most importantly, Bryan Murray has this team playing as a complete unit — five men up, five men back, and everyone on the same page. The top line of Alfredsson/Dany Heatley/Jason Spezza will give Selke candidate Samuel Pahlsson a run for his money, and they’ve got the skill and speed to break past Anaheim’s very tough defense. Factor in a very hot power play and you’ve got all the makings of a Cup champion.

Over on the left coast, the Ducks came pretty much as advertised — a frustratingly good blueline with Chris Pronger and Scott Niedermayer, offensive depth from a number of lines despite Chris Kunitz’s injury, and Jean-Sebastian Giguere reminding people why he won the 2003 Conn Smyth trophy. The Ducks have a tendency to take bad penalties, which can really hurt them against a strong power play team such as Ottawa, but they’ve also got the capability to roll four strong lines (including two equally tough top lines in Teemu Selanne/Andy MacDonald/Todd Marchant and Ryan Getzlaf/Corey Perry/Dustin Penner). The Ducks also can fall into lulls, though they seem to have mastered the bend-don’t-break thing pretty well.

Potential Hero: Can the Ducks rally to give Selanne his first Stanley Cup?

Sleeper Pick: Are the Sens a one-line team? Mike Fisher’s got the capabilities of grinding out a big-time goal when needed.

By Mike Chen
This entry was posted on Friday, May 25th, 2007 at 2:56 pm and is filed under HOCKEY, Ice Chips, Mike Chen. You can follow any responses to this entry through the RSS 2.0 feed. You can leave a response, or trackback from your own site.