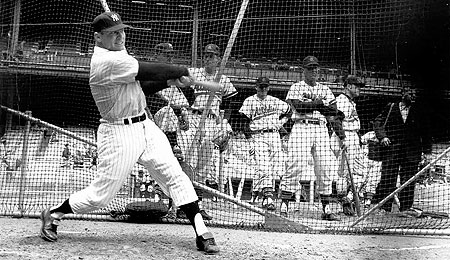 The Mick on your Fantasy team? It doesn’t have to be just a fantasy.

Fantasy baseball…it has become a big part of baseball fans’ lives on an annual basis. Drafts, free agents, and trades — these are all terms that every fantasy sports player knows. But, have you ever taken a page from histories past and played with Babe Ruth, Mickey Mantle, Jackie Robinson, or Brooks Robinson for that matter? How would you ever play a 1958 player in 2007? The answer, my fellow sports junkies, is the Diamond Mind Baseball (DMB) simulation.

I got turned onto DMB in 1998 and have been playing ever since. The concept is simple: take all the baseball stats you can possibly think of, cram them into a computer program, and see what happens when you put Barry Bonds of 2000 in Coors Field!

With leagues ranging from 1927 to 2006 (since it is stats-based, the game is always one year behind the current season), you can play with your baseball idols or draft the latest rookie phenom — the choice is up to you. Now, there is no mixing of old timers and new whipper snappers in the same league, but you get to see what it was like in 1928 when pitchers threw 330 2/3 innings (Burleigh Grimes) and only one hitter in the same year had over 32 home runs (Ruth had 54 while two were tied with 31 — Jim Bottomley and Hack Wilson). Or how about 1930, when Wilson busts out with 56 HRs and 191 RBI, while Lefty Grove threw 291 innings with an ERA of 2.54, all the while racking up 28 wins?

Want to play where your guys get younger? I’m in one league that moves backwards in time. We are in 1995 now and move to 1994 after this season — so Ozzie Smith just keeps getting better for me! The options are just endless really.

From what I’ve learned about the DMB game engine (the game engine secrets are guarded tighter than the Taliban’s HQ building), it runs off a hodge-podge of mathematical computations for every imaginable stat in baseball. Bill James’ handbook and Doug Decatur’s Behind-The-Scenes Baseball books are what I have used to help navigate through my drafts.

The appeal behind the simulation league is you get to be the GM. You run your draft, you set the lineups, and you arrange the rotation and bullpen. If you play a H2H game online against your opponent, you get to decide if you take the pitch or swing away, pitch around or challenge the hitter, steal, pickoff, pitch out, etc. The options are yours to make. You bat who you want and pitch who you want; no more leaving it up to the major league manager to decide how your fantasy team turns out. If the team is great it is all you, but if they finish in last place, that’s all you too.

Now, here is the important part: what does it cost to play? Well, most leagues that I’ve seen do not require you to have the game. Although it is highly recommended that you get the game so you can understand what it looks for when running simulation. The game by itself is US$49.95 or US$69.95 for the game with the 2006 season disk, and the past season disks range from US$14.95 to US$24.95 (you only need a season disk if you are commissioner of a league).

What I’ve found in my 10+ years of playing fantasy sports is that Sim leagues tend to hold my attention more because I get to pick who I want to play and who I want to sit each game. I don’t have to draft someone and hope Lou Piniella likes him as much as I do. No more sleepers, you already know what they did. But, at the same time, everything changes since the guys are (a) playing in different ballparks than they did in real life; (b) don’t always have the same protection in the lineup or bullpen like they did in real life; and (c) teams can be stacked with some leagues having only 14 teams or more realistic with as many as 24 teams (that’s the most I’ve seen, anyway), creating real parody for the league. I can put Sammy Sosa and Bonds on the same team in 2001, stick them in Coors Field and see if they can smack around 85 HRs each! Or, I can grab a pitcher that threw 330 innings and pitch him about every third day without fear of injury. That’s the beauty of the game — the calls are mine to make.

If you would like more information about Diamond Mind and its products, please visit their web site. If this sounds like something you would be interested in doing, you can visit some leagues I am in or have been in here: Richards Leagues and even an online H2H league named American Baseball League. A big list of leagues can also be found on the DMB web site here.

Check it out; I promise that once you start with the simulation leagues, you’ll be hooked for life!

By James Morris
Tags: Fantasy Baseball
This entry was posted on Wednesday, April 18th, 2007 at 8:30 pm and is filed under BASEBALL, Draft strategy, James Morris. You can follow any responses to this entry through the RSS 2.0 feed. Both comments and pings are currently closed.