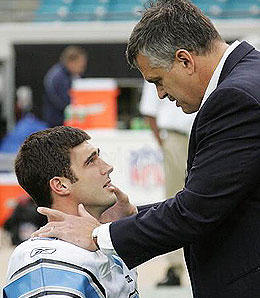 No wonder Matt Millen wanted to choke Joey Harrington; he was the ultimate reminder of his failure as a GM.

Editor’s note: This is Derek Jones’ debut article on RotoRob. The latest addition to the site, Derek will team with Andy to help provide readers with top notch fantasy football coverage year-round. Please help me in welcoming him to the site. His encyclopedic knowledge of the sport will be a fantastic asset.

Over the past two seasons, no division has been as hard to stomach as the NFC North. Matt Millen, Brett Favre’s will-he-or-won’t-he routine, the Sex Boat Vikings and the notorious Tank Johnson are only just a few of the issues that have blown through this mediocre division since 2005. With that illustrious introduction, let’s open our eyes slowly and carefully to examine the free agent happenings in the NFC North.

The Skinny ‘ If you listen closely, you can hear a band tuning up their 2007 concert performance that is set this year for Chicago. You know them well. You’ve listened to their CD on repeat numerous times. They’ve played the big venues lately in Philadelphia, Charlotte, St. Louis and Oakland. After a lackluster tour in Seattle last year, the band vows to be back and tear down Chicago. That’s right. Your favourite band, ‘Curse of the Super Bowl Runner-Up’ is back to deliver its classic hits, including:
Off-Field Distractions, Complacency and the mega smash hit, Season-Ending Injuries.

In all due seriousness, the Bears have attacked this offseason with the aggression of a team that has no interest in repeating as NFC Champion. From a fantasy standpoint, the offseason has focused on the loss of Jones and potential departure of LB Lance Briggs, who is on the trading block.

On the bright side, the Jones departure will benefit those in keeper leagues with Cedric Benson, who finally gets a chance to be the number one back in Chicago. Benson should be considered in that second tier of backs until he can prove himself to be legit and durable.

The Skinny ‘ Detroit’s most important off-season news to date came via trade when it shipped out CB Dre’ Bly to Denver for RB Tatum Bell and T George Foster. With the arrival of Bell and Duckett, it seems that Millen and company are worried about the future of RB Kevin Jones, who suffered a Lisfranc injury last season. It appears that Bell will be the starter at the beginning of the 2007 season.

Defensively, the Lions recovered somewhat from the Bly loss by picking up Fisher from a respectable Rams secondary. However, the secondary could take a step back without Bly and Holt.

The Skinny ‘ While Favre played the retirement guessing game again, the Packers opted to stay conservative in the free agent market this season. Even though having old No. 4 around for another season is great, he’ll suffer immensely if he doesn’t have help in the backfield.

The Packers must address their running back situation eventually with the loss of Green and could do that in the first round of the draft. The Packers made the right move by jettisoning a running back that is on the downside of his career. However, now they must fix the hole they created. One would assume they would not have their future Hall of Fame quarterback handing off to Vernand Morency to start the ’07 season.

The Skinny ‘ If the Vikings opt to go anywhere else but offense in the first round of the draft, then there are a lot of problems in Minnesota. A team already lacking offensive talent allowed Johnson to walk. Normally, letting go of a quarterback that turns 39 in September is a wise thing. A problem arises though, when the Vikings leave themselves with Tarvaris Jackson as the only real option at quarterback.

The Vikings couldn’t upgrade themselves too much in the free agency pool from the wide receiver area because of the lack of depth and quality in the market at this position. Look for them to address that position in the draft.

Overall offensively, Jackson’s potential run as the Vikings quarterback could diminish the value of Chester Taylor and whomever they decide to draft in the first round on offense (possibly Ohio State WR Ted Ginn Jr. or another receiver).

Defensively, the loss of Smoot should not hurt severely because his play was somewhat disappointing in Minnesota. It’s likely that Lake Minnetonka will miss him more than the Vikings secondary in the long run.

By Derek Jones
Tags: NFC
This entry was posted on Friday, April 6th, 2007 at 5:32 pm and is filed under Derek Jones, FOOTBALL. You can follow any responses to this entry through the RSS 2.0 feed. Both comments and pings are currently closed.