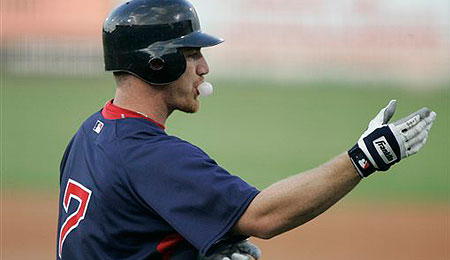 If you have a chance to deal J.D. Drew for Brian Roberts and you don’t pull the trigger, it could blow up in your face.

I am in a 16-team keeper league.’I need a second baseman before the season starts.’What do you think about J.D. Drew for Brian Roberts?

If you can get Roberts for Drew, then I say do it. Roberts will be a top three to five fantasy 2B I will bet. Drew can’t go a week without pulling a Kerry Wood and getting hurt. Do the deal, man. Do it!

Seems all of that closer talk in Boston is gone.

The best decision, by far.

I thought I’d mention a prized sleeper on the Angels in Reggie Willits.

He’s arguably the best fielder on the club (he could always get to the ball and now has been gunning down runners from CF and RF this spring), has an amazing OBP, and has hit around .300 for most of his career.

And he’s got great base-running skills.

Thanks for the tip. I have followed Willits’ minor league career, but he never struck me as a future starter for the most part. Still, from the sounds of it, he’d be an excellent source of cheap steals. I’m not sure I’m ready to call him the new Figgins (given that Chone offered phenomenal positional flexibility by playing all over the field), but if you honestly think Willits is capable of that many steals, then he’s someone who needs to be on our radar.

I enjoy your column on Rotoworld. I need a little advice on who to pick next week at my draft. I rebuilt my team last year, and have the fifth pick in a deep draft this year. My league is a 5×5 Roto league with 14 teams and a three-year holdover rule. We start 10 hitters (catcher, first baseman, second baseman, shortstop, third baseman, four outfielders, one DH) and eight pitchers (any combo). My holdovers are as follows:
‘
Prince Fielder, Howie Kendrick, Miguel Cabrera, Carl Crawford, Grady Sizemore, Vernon Wells, Matt Cain, Dontrelle Willis, Justin Verlander and Jonathan Papelbon.
‘
Like I said, I have the fifth pick in the draft and the players that will be available at my pick are David Wright, Vladimir Guerrero, Travis Hafner, Lance Berkman, Chris Carpenter and Roy Oswalt. I’m leaning towards Wright because I would have him for three years and’I think he would have the most long-term potential than all of them, even though I could use another starter and I already have great hitting. However, Wright makes me not have to worry about drafting another hitter for awhile.

This is where I need your expert opinion. Who would you draft if you were in my spot? Thanks for taking the time to read my e-mail. I hope to hear from you soon.

One other question: I have a choice between Kendrick and Francisco Cordero as my last holdover. Who do you like better?

If you don’t take Wright I will find you and thump your skull! The guy is crazy good and will be the best 3B for years to come.

I think Kendrick has the skills to contend for a batting title in the future. He has a good stick and a good glove.

By James Morris
This entry was posted on Thursday, March 29th, 2007 at 5:33 pm and is filed under BASEBALL, Dear RotoRob, James Morris. You can follow any responses to this entry through the RSS 2.0 feed. You can leave a response, or trackback from your own site.