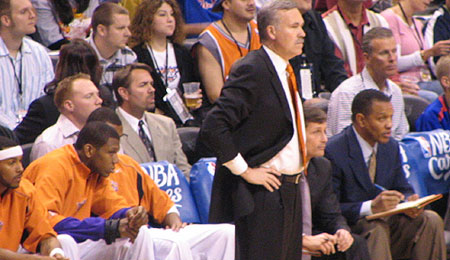 Mike D’Antoni, who’s come under fire for his short bench, can shut his critics up by guiding the Suns into the NBA Finals.

The Phoenix Suns have been knocking on the door for a while, and while their big win over Dallas two weeks ago was sweet, it will mean nothing if they can’t get past the Mavericks and return to the NBA Finals for the first time in 15 years. In today’s Position Battles, we put stare into the Suns and their season to date.

We also review the rookie season of Randy Foye to date and see how the former Villanova star has adjusted to life as an NBA player.

Are you the only person on the planet without a gmail account? That’s okay…as a consolation prize, we’ve got all the fantasy basketball tidbits fit to print in Position Battles.

By RotoRob
This entry was posted on Wednesday, March 28th, 2007 at 2:41 pm and is filed under BASKETBALL, Position Battles, RotoRob. You can follow any responses to this entry through the RSS 2.0 feed. You can leave a response, or trackback from your own site.