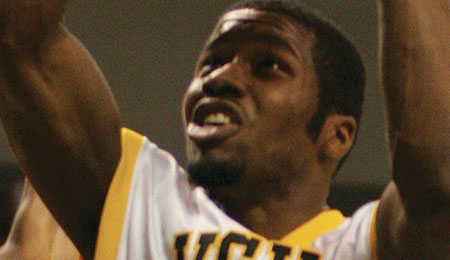 SKINNY: First of all, thank you, VCU! By winning the Colonial Athletic Association (CAA) tournament, the Rams effectively blocked George Mason from getting a March Madness bid. Now, I don’t have anything against GM (aside from it ruining my 2006 bracket, of course), but I was absolutely frightened that I’d have to deal with this school in my bracket again this season. Anyway, the Rams aren’t exactly new to the big tourney. They last appeared as a No. 13 seed in 2004, and narrowly missed upsetting No. 4 Wake Forest in the first round. This season, VCU went 27-6 overall while setting a school record for wins and a CAA record with 19 wins in conference play.

HISTORY: Including the 2004 team, which lost 79-78 despite leading for much of the second half against Wake Forest, the Rams have made seven NCAA tournament appearances and have gone 4-7 overall in tournament play. In 1985, VCU was given a No. 2 seed, but was upset in the second round by No. 7 Alabama.

WEAKNESSES: VCU is quite…how should I say…vertically challenged. They have one true centre in Calvin Roland, but for the most part, the Rams will play without a big man in the middle. This weakness is evident in their rank in rebounding (202 in the country). When you are one spot below the Binghamton Bears in grabbing boards, it’s probably a bad thing.

KEY PERSONNEL: While he didn’t lead the team in scoring this season, sophomore Eric Maynor became the catalyst to the Rams offense, especially in the Colonial tournament. Against George Mason, it was Maynor who scored 20 points overall and nine straight towards the end of the contest. The guard was named the tournament’s Most Outstanding Player. The other guy to watch will be junior Wil Fameni. As the tallest Ram (6’7″) to get over 20 minutes per game, Fameni needs to anchor the Rams shaky defense while forcing opposing big men to exert effort in their own defensive end.

INTANGIBLES/OUTLOOK: Chances are VCU will qualify as either a No. 12 or No. 13 seed, which has historically been a spot from which upsets routinely occur. Unfortunately, the Rams aren’t the kind of squad that make for an attractive upset pick. Their smaller size and lack of defensive toughness are glaring issues. For success in March, VCU will need their controlled attacking game to continue clicking, and some luck. Actually, a lot of luck. But weren’t people saying that about George Mason last year as well? (Arg…&*$#! Dare I pick another CAA Cinderalla?)

By Andy Goldstein
This entry was posted on Wednesday, March 7th, 2007 at 7:34 pm and is filed under Andy Goldstein, BASKETBALL, March Madness Preview. You can follow any responses to this entry through the RSS 2.0 feed. You can skip to the end and leave a response. Pinging is currently not allowed.