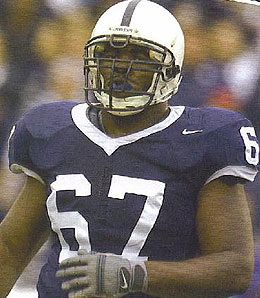 Penn State tackle Levi Brown could be a top 10 pick in the NFL draft, possibly headed to the Miami Dolphins.

Part I can be found here. But let’s get to it!

Expert’s Whispers – The Dolphins had plenty of issues on both sides of the ball, so they could go anywhere come draft day. Levi Brown (OT, Penn State) and Alan Branch (DT, Michigan) are on the radar.

Fantasy Owner’s Dream – It is my opinion that the Dolphins could use a real quarterback, and Brady Quinn (QB, Notre Dame) might just be available.

Expert’s Whispers – The only consensus experts have about the Falcons first round draft pick is that they will go for a defensive player. More specifically, Atlanta is short on talented secondary players. Reggie Nelson (S, Florida) and LaRon Randy (S, LSU) are two names to keep in mind.

Fantasy Owner’s Dream – As I said in Sunday’s column, defensive players do very little for the average fantasy owner. It’s a long shot, but if Ted Ginn Jr. (WR, Ohio State) was available, he’d be a nice boost for Mike Vick. Dwayne Jarrett (WR, USC) would also add another dimension to the offense.

Expert’s Whispers – The 49ers are another team that will probably address their defensive needs come late April. Gaines Adams (DE, Clemson), Adam Carriker (DE, Nebraska) or Jarvis Moss (DE, Florida) would add something to their defensive line depending on availability (Gaines could go earlier) and whether the 49ers were more worried about the run (Carriker) or the pass (Moss).

Fantasy Owner’s Dream – I’m really not sure what gave Willis McGahee the confidence to proclaim himself the best running back in the NFL. He didn’t even break 1,000 yards this past season. There are even rumors he could be headed out of town. Assuming he does stay, his owners would have to love seeing a stud offensive lineman plowing the way for him. Unfortunately, that’s not a deep position, and the prospect of Brown (OT, Penn State) still being around is low. Anyway, maybe the Bills could trade McGahee and then take Marshawn Lynch (RB, California). Okay, probably not.

Fantasy Owner’s Dream – Consider me not a fan of all things Scott Linehan. The lean to a ‘more balanced’ team capable of playing deep into the postseason is a horrid development to the fantasy football world. I want three fantasy relevant wide outs, dammit! Take Jarrett (WR, USC)! You can always win a Super Bowl next season! Aw, shucks.

Expert’s Whispers – Todd McShay of ESPN.com has Brown (OT, Penn State) going to the Panthers. Of course, everyone and their NFL Europe sisters need offensive lineman, and I don’t anticipate Brown being there. The other expert’s picks are defensive guys like Laron Landry (S, LSU).

Fantasy Owner’s Dream – Jarrett (WR, USC) would open up space for Steve Smith, so I’m all for that. Unfortunately, I’d almost put money on the Panthers not seeing any good offensive value picks at 14. If they don’t move from their spot, they’ll be essentially forced to go defensive.

Fantasy Owner’s Dream – Santonio Holmes played well last season and even improved towards the end of the year. Still, with Hines Ward getting up in age, acquiring Jarrett (WR, USC) or even a project like Robert Meachem (WR, Tennessee) would be intriguing.

Expert’s Whispers – Ahman Green played all right last season, but he no longer has the game breaking ability he once did. Lynch (RB, California) does have that, which has all the experts ready to see him in green and yellow.

Fantasy Owner’s Dream – Finally, the experts and I can be on speaking terms again.

Parts III and IV will be coming out in the next week, which gives you time to consider how long you’d have to practice piano to be better than this cat (My guess: At least an hour.)

By Andy Goldstein
This entry was posted on Thursday, February 22nd, 2007 at 3:58 pm and is filed under Andy Goldstein, Draft report, FOOTBALL, Gridiron Goldstein. You can follow any responses to this entry through the RSS 2.0 feed. You can skip to the end and leave a response. Pinging is currently not allowed.