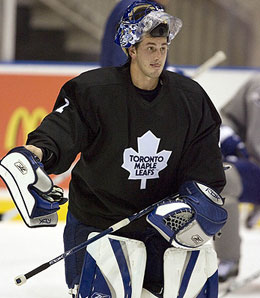 Andrew Raycroft has started 16 straight games for the Leafs, and why not? The dude is locked in right now.

Guess who’s the hottest goalie in the league? It’s none other than Toronto’s latest saviour, Andrew Raycroft. Raycroft bounces between unbelievable and mediocre for streaks of time; right now, ride him while he’s hot.

Jonathan Cheechoo’s strange season is back to hot again — four goals in the last two games. Sure, it’s only two games, but the way he scored them was noticeable; Cheechoo was back to scrapping for his space and getting his one-timer off, something that he hadn’t done for a while. Perhaps putting him back with Joe Thornton had something to do with it, or perhaps he just woke up. Cheechoo’s a streaky scorer, so keep an eye on him.

Ryan Whitney’s quietly becoming a great fantasy performer. Of course, it helps to have Sidney Crosby and Evgeni Malkin on the power play. Whitney’s already eclipsed his rookie total and is on pace for about a 60-point season. He’s also on the right side of the +/- ledger, which is kind of indicative of the entire Penguins turnaround this season.

Word out of Buffalo is that Tim Connolly is on the comeback trail and could be inserted into the lineup in the coming weeks. Connolly’s a crafty playmaker when he’s healthy and could boost an already lethal team. Keep checking to see if and when Connolly’s return is imminent. He could be a great last-minute pickup to close out your fantasy season.

When will Darcy Tucker return? He’s still on crutches which means that his foot problems will be an issue for conditioning, even when he returns. More importantly, though, is whether or not Tucker will be somewhere other than Leaf Land in a few weeks.

San Jose’s goaltender rotation takes a hit with Evgeni Nabokov out with a groin strain. This means that, however, the Sharks should put up a ton of goals while he’s out — Vesa Toskala’s goal support is approaching the four Goals-For mark while Nabokov’s was under two (despite the two having similar save percentages).

Rocket Richard watch: Who will score the most goals this season? Your frontrunners are Alexander Ovechkin, Marian Hossa, Vincent Lecavalier, Dany Heatley, Teemu Selanne, Martin St. Louis and Ilya Kovalchuk. My money’s on Marian Hossa, who’s got the best combination of a good team, work ethic and skill.

Too bad they don’t count goals-per-second as a fantasy stat: Ray “The Wizard” Whitney’s magical season continued with three goals in 100 seconds. That’s efficiency for you.

Martin Brodeur’s played the most games among goalies this season. The result is a league-leading 10 shutouts — four more than the goalies tied for second.

Since returning from surgery, Cory Stillman’s had a rough go. He’s only got 16 points in 24 games and is a lowly -8. However, half of his points have come on the power play, meaning that he’s at least getting the opportunities to contribute.

In the “minor trade” department, Carolina re-acquired Josef Vasicek for Eric Belanger. Vasicek, who was a scratch in recent games, should get an opportunity bring some size to the Canes lineup. However, don’t expect any significant uptick in his overall production.

Statistical anomaly time — Sheldon Souray is the only defenseman in the top 20 power play goal leaders with 14. The next highest defenseman is Dion Phaneuf.

By Mike Chen
This entry was posted on Friday, February 9th, 2007 at 10:48 pm and is filed under HOCKEY, Ice Chips, Mike Chen. You can follow any responses to this entry through the RSS 2.0 feed. You can skip to the end and leave a response. Pinging is currently not allowed.