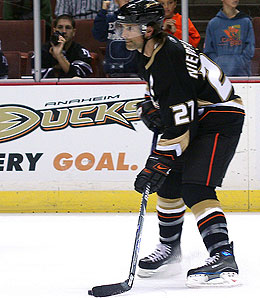 With Chris Pronger and Jean-Sebastian Giguere already back in the fold and Scott Niedermayer expected to return Tuesday, the Ducks will again be dominant.

Want a way to stop a losing skid? Get your No. 1A defenseman (Chris Pronger) back and your No. 1 goalie (Jean-Sebastian Giguere) back. The return of that duo has the Ducks righting the ship and moving back to where they were in earlier this season. Don’t look now, but Scott Niedermayer (foot) might be back as soon as Tuesday.

Mike Modano is back from his groin problems, but he hasn’t done that much stats-wise. Doesn’t matter, though, since Marty Turco and the Dallas defense are pushing the Stars towards victories. Aesthetically, the Stars are awful to watch, but a win is a win.

Here’s something you haven’t seen much lately: a Philadelphia Flyer defenseman getting five points in a game. That would be Alexandre Picard (no relation to Jean-Luc). However, remember that this is the Flyers we’re talking about here, so this is just a blip on the fantasy radar.

The “When Will Sidney Crosby Break 100 Points?” watch is on. At his current clip, he needs probably about 10 games, so I’m guessing the end of February.

Jordan Staal is leading the league in shorthanded goals (just missing another last night when he rang it off the post) and shooting percentage. He’s also got one of the lowest shot totals in the league at 68. You think the Penguins coaching staff should encourage him to let it fly more or something?

Washington’s Chris Clark is, like everyone else on the team, overshadowed by Alexander Ovechkin. Clark’s not getting a lot of press other than being the Caps’ captain; still, he’s got 40 points (22G, 18A) on a mediocre team, making him a good depth pickup.

Of all the players with over 100 PIMs, only one of them has great stats and that’d be starting All-Star Sheldon Souray.

The Lightning are looking at Johan Holmqvist to carry them to a solid playoff run. If he keeps playing the way he is, he’ll be all right — in the past week, he has a 1.30 GAA and .947 save percentage and he’s won seven of his last eight starts.

On the other hand, Dwayne Roloson’s had a rough go recently, letting in 14 goals over his last three starts. Roloson has bounced between amazing and mediocre this season — maybe that’s why he never got a chance at being a No. 1 goalie until this year.

The San Jose Sharks power play has been beyond awful lately, but don’t fret — this is a team that has led the league in power play percentage for the majority of the season. Every team goes through dips, but they’ll get things back to normal soon.

For smaller leagues, a guy who might still be available is centre David Legwand. The No. 2 overall pick by Nashville back in 1998, Legwand is finally coming into his own. No, he’s not playing like a No. 1 centre, but he’s comfortable as a second-line player and his +/- is among the league’s best.

Talk about a cold streak. Petr Sykora, who was dynamite during the first part of the season, only has six points since the dawn of the New Year. Part of this is the overall inconsistency of Edmonton, the other part is his shifting linemates. However, his performance is similar to that of his whole career — hot for a bit, then ice cold for a stretch, and back again.

We’re heading into the stretch run and playoff positioning is making games much more interesting. The next few weeks will determine who’s buying and who’s selling — and, of course, how that affects your fantasy team.

By Mike Chen
This entry was posted on Friday, February 2nd, 2007 at 2:13 pm and is filed under HOCKEY, Ice Chips, Mike Chen. You can follow any responses to this entry through the RSS 2.0 feed. You can skip to the end and leave a response. Pinging is currently not allowed.