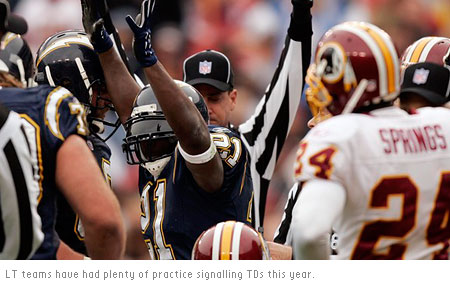 For most of the fantasy football world, this is the final week of games. (Fear not! I will be back next week for the stragglers out there.) But it’s time to get stingy. This is championship week — no more playing around. In fact, let me go over some championship strategy right now. In 95 per cent of leagues, there are two specific kinds of teams playing for the title. One is the ‘LT Team.’ Maybe the whole team is solid, maybe not, but the guy (or gal) has LaDainian Tomlinson. The other type of team is the ‘Non-LT Team.’ It’s probably a better ensemble group with a stud or two. If you are the former, you are probably looking for safe starts. You need your quarterback to toss a couple touchdowns and keep the wheels moving. Basically, you just need Tomlinson to do his thing and it’ll be good.

If you don’t start a guy who has 60 rushing touchdowns (or whatever he has), you are looking for the big play guys. You don’t need a quarterback who will get you 200 yards and a couple touchdowns. You can’t assume that will help you much at all. Tomlinson owners have eaten the average teams up all season. My advice to the owners that are going up against Tomlinson is to take risks. You have to go in with the mindset that a good day from your team won’t win. It’s about conquering a player who is having the best fantasy season in NFL history. And with that, on to the games.

Minnesota at Green Bay – There aren’t too many good starts from either side in this game. Chester Taylor came back from injury last week and had a mediocre stat line while only carrying the ball 11 times. LT teams might be able to get away with starting him as a second back, but non-LT teams can only use him as a flex play at best.

With the Vikings run defense being all-world, Ahman Green should be promptly benched. This ain’t a Green game for anyone. The Packer to target is Donald Driver. He’s going to the Pro Bowl and should prove worthy against the Vikings porous pass defense.

Kansas City at Oakland – Two names. Larry Johnson and Tony Gonzalez. Other than those two, this game will only be worth watching for the new Heidi Klum ‘Santa Baby’ commercial.

Baltimore at Pittsburgh – Sadly, the starts just aren’t there in this one, especially on the Ravens’ side of the ball. Honestly, are you going to start Jamal Lewis? Derrick Mason? In fact, the only player I’d consider is Mark Clayton for the non-LT teams out there. He has a chance (however low) of having a huge game. He’s done the two touchdown thing before, at least.

The Steelers seem to have more options. Willie Parker is tough to bench. He plays extraordinarily well at home, is on a hot streak, and can be considered a stud. You never bench your studs, even against the Ravens. I’d leave Ben Roethlisberger on the bench at this point. His penchant for throwing interceptions this season scares me against an aggressive Baltimore defense. Hines Ward, on the other hand, is a good, safe option. He’s optimal for an LT team.

Carolina at Atlanta – Steve Smith has certainly had a somewhat disappointing campaign, but I think he’s a must start against the Falcons. He is one of those guys who has a chance at having a huge game. Start him and cross your fingers. For the Falcons, Mike Vick is a strong option for non-LT teams. Again, is a 200-yard game and two passing touchdowns going to beat LT? Probably not. But the potential for Vick’s combined passing and rushing statistics is pretty high. It’s possible for him to negate Tomlinson, and there aren’t many guys out there who can do that. On the flip side, if you have Tomlinson, I wouldn’t start Vick. He is just as likely to turn the ball over and give you nothing. He’s not a safe start at all.

Chicago at Detroit – I honestly don’t think there are any good starts in this game. Chicago is headlong into ‘Rest the Starters’ mode while the Lions are entering week six or seven of their ‘Is the Season Over Yet’ status. I guess you could maybe try Roy Williams at a flex position, but even that is a high risk move, as his 11 receiving yards last week can attest to. Ummm….how about Klum as Santa again?!

Indianapolis at Houston – It isn’t every year this is true, but the Colts won’t feel the need to pull their starters here in Week 16. Fantasy owners should take full advantage of this and start Peyton Manning, Marvin Harrison and Reggie Wayne. Unfortunately, Joseph Addai is having injury problems, which makes both running backs too risky for anyone to start.

Believe it or not, I have relented. It’s okay to start Ron Dayne no matter what your situation is. This is how bad the Colts run defense is. They could make Dayne look like…well, a capable running back. Andre Johnson is probably going to lead the league in receptions, so keep him active.

New England at Jacksonville – Sorry, but Tom Brady has been worthless lately. Starting him means you might as well bookmark this game, cause you won’t be winning any money to buy a new Wii. In fact, the whole Patriots squad is not worth thinking about right now. Leave them be. The Jaguars are all about the running game. Maurice Jones-Drew is the prime start, while Fred Taylor is a decent flex play if healthy.

New Orleans at N.Y. Giants – There probably aren’t many Drew Brees’ owners that are still playing for anything this week thanks to last week’s debacle. In the off chance that you are, he should rebound nicely against the overmatched Giants defense. Depending on which wide outs actually play, there should be a couple of strong starts there. Marques Colston is probably the best option.

I am going to go out on a limb and call Tiki Barber a good start, even for non-LT teams. He scored a touchdown last week, and now faces a run defense that allows 5.1 yards per carry. It has potential to be a very large day. Plaxico Burress is also a fine start. He’s scored a touchdown or gotten more than 100 receiving yards in each of his last five games.

By Andy Goldstein
This entry was posted on Thursday, December 21st, 2006 at 3:29 pm and is filed under Andy Goldstein, FOOTBALL, Gridiron Goldstein. You can follow any responses to this entry through the RSS 2.0 feed. You can leave a response, or trackback from your own site.