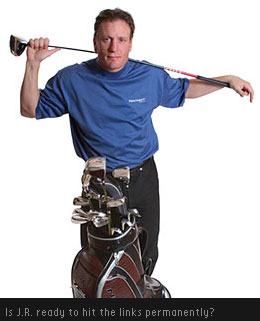 First off, let’s send our thoughts and good vibes over to Phil Kessell and his family. Kessell, the Bruins top draft pick this past season, is out of the lineup after undergoing surgery for testicular cancer. Kessell dropped out of the Calder race pretty quickly this season and this all but guarantees that he’ll be out for another chunk of the season, but stats aren’t the top priority on his mind. Get well, Phil.

On the other hand, let’s not send our thoughts and good vibes over to Jeremy Roenick, who decided that getting a beer was more important than watching the game with the night’s other healthy scratches. Of course, there’s no problem in the locker room, right J.R.?

In the “We can’t buy a win” category, the Lightning and the Hurricanes are slumping pretty badly. The ‘Canes are without Rod Brind’Amour and the Lightning are without not anyone named Vincent Lecavalier or Martin St. Louis. Vinny Prospal, Brad Richards, where are you?

The Blackhawks are alive and kicking. Martin Havlat‘s back, Tuomo Ruutu‘s scoring, Nikolai Khabibulin‘s playing well, and the Hawks are thinking about that precious No. 8 spot. Next step — getting that power play up from a horrible 11 per cent.

How good is the Sharks’ crease right now? Evgeni Nabokov and Vesa Toskala are both in the top six in goals against and save percentage right now.

As if the Flyers weren’t suffering enough, look at the list of walking wounded: Peter Forsberg, Mike Richards, Jeff Carter, Mike Rathje, Denis Gauthier and Geoff Sanderson. Technically, Robert Esche is hurt too, but that probably helps the team.

The Habs are playing without Sheldon Souray right now. His arm injury has nothing to do with him thinking about ex-wife and Baywatch babe Angelica Bridges.

Speaking of the Habs, look for the return of Chris Higgins in the next week or so.

Mike Modano gets engaged; Mike Modano goes on the IR with a “Lower Body Injury”…coincidence? You make the call.

For all of those Panthers fans hoping Todd Bertuzzi could come back and help rescue the team from their offensive woes, more bad news: Bertuzzi’s expected to be out at least another few weeks.

Talk about sophomore slumps — Petr Prucha’s only got five goals on a first-place Rangers team.

The Blue Jackets are finding a groove under Ken Hitchcock. Not only are they clawing back towards .500 (winning five in a row will help that), but Sergei Fedorov‘s finally playing well (10 points since Hitch took over) and Fredrik Norena has stolen the starting position from Pascal Leclaire for the moment. Nikolai Zherdev, however, isn’t doing much under Hitch’s watchful eye.

No column about stats and fantasy hockey could be complete without a hat-tip to Sidney Crosby‘s six-point night. After all the adulation Sid the Kid is getting, wouldn’t it be kinda funny if he just went into a gigantic slump right now?

For East Coast readers that may not see the Ducks (who are indeed Mighty), Chris Kunitz, Ryan Getzlaf and Dustin Penner have 16, 14 and 12 goals respectively. So it’s not just the Chris, Scott, and Teemu show in SoCal.

By Mike Chen
This entry was posted on Friday, December 15th, 2006 at 5:04 pm and is filed under HOCKEY, Ice Chips, Mike Chen. You can follow any responses to this entry through the RSS 2.0 feed. You can leave a response, or trackback from your own site.