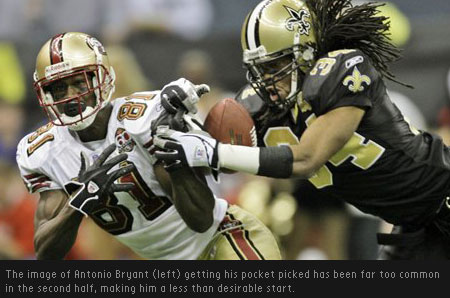 San Francisco at Seattle – The last time these two teams met, that bruising, relentless running back had the best yardage game of his career. Of course, I’m talking about Frank Gore and his 212-yard rushing performance in Week 11. He’s a start, obviously, in the national spotlight. With the 49ers handing off all evening, Antonio Bryant probably isn’t the best start. He has struggled the entire second half of the season, and doesn’t warrant anything more than a flex start.

In that Week 11 meeting, Shaun Alexander was just returning from injury and didn’t run all that effectively. You don’t need me to tell you to start him this week. The big news for the Seahawks revolves around Darrell Jackson. The receiving touchdown leader this season is out with an injury suffered last week. While devastating to Jackson owners, it’s good news for Deion Branch. The former Patriot should step up and have a big game. Matt Hasselbeck is a fine start as well.

Dallas at Atlanta – So wait, Tony Romo isn’t a deity of some kind? Shoot, I guess I’ll stop praying to the Romo figurine that I’ve turned into a shrine. That being said, Atlanta possesses one of the worst pass defenses in the league. I’m expecting a bounce back from Romo in the form of a couple touchdown passes. Julius Jones had a big run last week, but didn’t accomplish much outside of that. Marion Barber just didn’t accomplish anything. I would call both flex plays this week. Terrell Owens is an obvious start, but I also like Terry Glenn to play a role in the passing game.

Mike Vick, you just became my sworn enemy. I was digging you this season. You were putting up amazing rushing numbers. You were even tossing some touchdown passes. You hadn’t really thrown up too many clunkers all season. And then, against Tampa no less, you have a 155-yard passing, five-yard rushing, one-interception day?! Inexcusable. Horrid. Anyway, Vick is a weak first starter this week. He has, historically, played well at home. That, and he should be able to beat Roy Williams deep once, since everyone can beat Williams deep at least once. Avoid the Falcons’ running and receiving games, however. Only Alge Crumpler is worth a start other than Vick. But you all knew that already.

Cleveland at Baltimore – Everyone and their mothers think that this will be a boring AFC North game. I’m not going to try and tell you this will be a game with a ton of points, but there were significant fantasy factors in the last go round. Braylon Edwards had 114 yards and a touchdown. Derrick Mason had 132 yards and Mark Clayton chipped in with eight receptions, matching his career high. I think Edwards and Clayton are both marginal third wide out starts, depending on the rest of your roster. Boring? Maybe. Fantasy relevance? It’s there.

Detroit at Green Bay – Bad news for owners of Kevin Jones, and the worst news ever for owners of Kevin Jones in dynasty leagues: The Detroit back suffered about as bad a Lis Franc injury as is possible. His season is over. His 2007 campaign is on hold. His career is in jeopardy. *Gulp* This does mean that the Lions will have to throw the ball a lot. Jon Kitna’s penchant for interceptions makes him a weak option, in my view, despite the easy matchup. Roy Williams, on the other hand, is a decent start. Even Mike Furrey is a legitimate option. I actually shuddered while writing that last sentence.

Donald Driver has quietly had a very productive season. He is currently ranked fourth in receiving yards. Detroit isn’t really known for stopping, well, anyone, so expect Driver to continue his high-flying ways. Ahman Green traveled 130 all-purpose yards and crossed the stripe against the Lions earlier this season. He is a wonderful sneaky start. Other than that, I’d avoid the Packers offense. You can find a better option at quarterback than Brett Favre.

Houston at New England – Does anyone notice that Andre Johnson is on pace to finish with 113 receptions? At the same time, he has scored one touchdown in his last six contests. Oh well, he’s a start. For some reason, people in the fantasy community think Ron Dayne is worth a start this weekend. I still don’t see it, especially with the Patriots’ third-ranked run defense. Speaking of the Patriots, thanks for nothing last week! Tom Brady is a decent start, I guess. It is the Texans. But starting a quarterback who threw for a measly 78 yards the week before, that takes some guts.

Jacksonville at Tennessee – This just in: The Jaguars running game is pretty good. They clocked an historically inept run defense to the tune of…oh, I don’t know, 800 yards or something. I honestly lost count at around 300, but I do know the Jaguars set a team record for rushing yards in a game, which they accomplished by halftime. As long as they are healthy enough to play, both Fred Taylor and Maurice Jones-Drew (MoJo is his official nickname) are fine fantasy starts.

We also learned that Vince Young was probably the best player in the 2006 draft. (With the aforementioned MoJo coming in second. Reggie Bush is third, sorry.) If I were starting a new NFL team tomorrow, and could have any player in the league, Young would probably be my pick. That being said, he is still green and facing a much better defense this week. I still think he’ll contribute enough yardage on the ground to be worth a look, but he’s not a must start. Please leave Travis Henry on the bench.

Miami at Buffalo – Much like many of these power tool racers, the Miami Dolphins just don’t get off to a good start sometimes. But once they get moving, it takes a great force to stop them. Or…at least someone to pull the power cord out. Anyway, Marty Booker is the guy to start. With Chris Chambers mercifully questionable, Booker becomes the clear-cut first option. The Bills have been heating up themselves, thanks in large part to Willis McGahee. The former Miami Hurricane has come back strong from injury, which makes him a safe start here. Lee Evans has had some huge games against the Dolphins, so keep him active as well.

N.Y. Jets at Minnesota – I really don’t know what to say about this contest. NASA would have to pay me more money to watch this one than they will have to pay for a Moon outpost. Laveranues Coles and Jerricho Cotchery are the only starts here. Please, don’t make me think about this one ever again.

Pretty spiffy new digs we got here, eh? That ‘eh’ was for you, RotoRob!

By Andy Goldstein
This entry was posted on Thursday, December 14th, 2006 at 4:29 pm and is filed under Andy Goldstein, FOOTBALL, Gridiron Goldstein. You can follow any responses to this entry through the RSS 2.0 feed. You can skip to the end and leave a response. Pinging is currently not allowed.