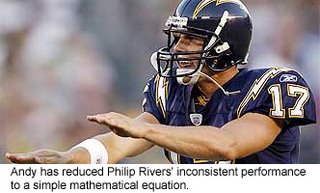 San Diego at Buffalo – Philip Rivers has been one of the more inconsistent fantasy quarterbacks this season, but with a little statistical analysis, it shouldn’t be too hard to gauge when to use him. Rivers has passed for two or more touchdowns five times. In those games, the opponent’s pass defense ranked an average of 22nd overall in the NFL. Meanwhile, in the other six games with fewer than two touchdowns, the opponent’s pass defense averages around 10th in the league. He’s a pure matchup quarterback.

I went through all of that because the Bills are currently ranked 16th in pass defense. Right smack dab in the middle. It’s as pure a pick em’ that fantasy football has seen perhaps all season. One touchdown is basically a guarantee and Rivers has got a 50 per cent chance at two. Moving on, consider Willis McGahee a weak second or strong flex back this weekend. He had a nice game last week, but the question of durability remains.

San Francisco at New Orleans – Frank Gore was listed as questionable earlier this week, but has since been upgraded to probable. Against the Saints’ 29th-ranked run defense, Gore should find plenty of room to run wild. He’s been a season-saving type player this year. Just ask anyone who drafted him after taking Clinton Portis, Lamont Jordan, Carnell Williams or Shaun Alexander in the first round. Other than Gore, avoid the 49ers’ offense. The Saints defend the pass well, and San Francisco will stay on the ground anyway.

New Orleans, on the other hand, should have a good offensive day all around. Drew Brees, Joe Horn and Deuce McAllister are safe starts. If Marques Colston is healthy enough to play, he’s a fine start. If he’s not, then Devery Henderson will pick up the slack again. Either way, one of those guys will be first option wide out. Reggie Bush is an interesting play, but the 49ers’ defense has been performing somewhat better lately. Bush has been a bust all year, and that should continue, unfortunately.

Houston at Oakland – Oh, how I love the smell of incompetence on Sunday afternoons. Andre Johnson will do his best to make it an interesting game, but other than that, there isn’t much to see here. Move along, folks. Try this fun, bizarre game!

Jacksonville at Miami – The battle for Florida is at hand! Between rain showers and orange groves these two ‘defense first’ teams will square off. Sadly, it probably isn’t the most interesting game for fantasy football purposes. Both teams will attempt to control the game with their running backs, and both will find it a tough go. Fred Taylor is a very weak second fantasy option while Maurice Jones-Drew is a weak flex start. I’d leave all Dolphins on the bench with the possible exception of Marty Booker. He has turned into Miami’s top receiving option and has an outside shot at a touchdown.

Dallas at N.Y. Giants – The Tony Romo era couldn’t be going much better. And did you know he’s been romantically linked to Jessica Simpson? That story almost slipped under the radar. Anyways, keep Mr. Simpson active against the Giants. He’s been too hot to dump. Err…bench. Terrell Owens and Terry Glenn are both good wide out options, but the Cowboys’ running game has been mostly frustration for us fantasy folk. Julius Jones is getting more carries, but Marion Barber keeps stealing the touchdowns. Expect that trend to continue until further notice.

Talking about running backs stealing touchdowns, ladies and gentlemen, may I present your 2006-07 New York Giants! Here we have Tiki Barber, all around yardage menace. He sports a sparkling 4.8 yards per carry average and is fifth in the league in total yards from scrimmage. There’s just one catch. You have to bring along this Brandon Jacobs guy. Much like Cris Carter, all he does is score touchdowns. Anyway, leave Eli Manning on the bench, but go ahead and start Plaxico Burress. Even if Michael Strahan threatens you.

Tampa Bay at Pittsburgh – This could be an ugly game. On the Bucs’ side, there’s…umm…not much. Carnell Williams might be a weak flex play, but his one touchdown this season doesn’t inspire me all that much. Joey Galloway has had some fantasy relevant games, but I wouldn’t want to start him against an angry Steelers’ defense.

The Steelers should have a somewhat better offensive day. Ben Roethlisberger is a sneaky start. The Tampa pass defense is ranked 22nd, which isn’t very good. Hines Ward is out with an injury, but I expect the balanced Steelers’ wide outs to all contribute. Willie Parker could also score a receiving touchdown, and remains a weekly starter despite the pitiful games against the Ravens.

Seattle at Denver – I apologize to my readers, but I must rant. Shaun Alexander (during the preseason, I picked him as my running back bust because of his overuse last year) came back from injury recently and ran well last week. In fact, he got over 200 yards on the ground. So what’s wrong here? The Seahawks gave Alexander 40 carries in that game. Four-Zero. That’s twice as much as a guy coming back from an injury should be getting in a game. The human body, even an amazingly fit one, is not made for this kind of abuse. If the Seahawks want Alexander down the stretch and in the postseason, they need to take care of him. They must make sure he touches the ball 20 to 25 times a game — no more than that. It’s unfair to him and jeopardizes his career.

Anyway, nothing I can say will make you bench Alexander this week, but don’t be surprised if he struggles. Guys who carry the ball 40 times in a game tend to take a couple weeks to get back on track. Meanwhile, start Matt Hasselbeck, Darrell Jackson and Deion Branch. I expect Seattle’s passing game to click well. For the new look Broncos, only Javon Walker is worth a fantasy look. Who knows how Jay Cutler will take to the NFL.

Carolina at Philadelphia – Flex scheduling or not, the Eagles can’t seem to escape the national spotlight at the moment. That’s not good news since the loss of Donovan McNabb meant the loss of their one true prime time player. Brian Westbrook remains a good play while Reggie Brown is probably the best touchdown threat. Other than that, there isn’t much to get excited about for the Eagles. Well, I take that back. Who isn’t excited about Jeff Garcia?!!?

Jake Delhomme has had a rough season. With only 12 touchdowns on the season and one 300-yard game, there’s no reason to start him here. Also, the running game is very much up in the air right now. DeShaun Foster might play, which is throwing a monkey wrench into the value of DeAngelo Williams. Whichever player gets more carries is a good fantasy start, but that may not be known until game time. But I’m sure Tony Kornheiser will start both of them anyway.

By Andy Goldstein
This entry was posted on Saturday, December 2nd, 2006 at 3:36 pm and is filed under Andy Goldstein, FOOTBALL, Gridiron Goldstein. You can follow any responses to this entry through the RSS 2.0 feed. You can skip to the end and leave a response. Pinging is currently not allowed.