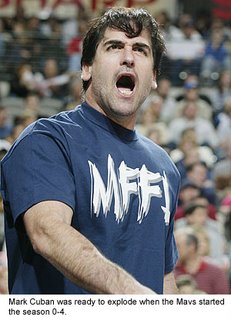 Couldn’t you just see the steam rising from Mark Cuban’s ears as he watched his defending Western Conference Champion Mavericks sputter to an 0-4 start? Well, the club has won 10 straight since then, so all is right in the city of Dallas again. We take a look at how things are going for the Mavs in this week’s Position Battles.

We also report on another great Texas team, as the Spurs finally lost one on the road on Monday. Tony Parker has been tearing it up for San Antonio.

Are you wondering who’s fighting who for PT these days? Have a look, as there are plenty of other fantasy basketball situations we check in on this week in Position Battles.

By RotoRob
This entry was posted on Wednesday, November 29th, 2006 at 12:54 pm and is filed under Position Battles, RotoRob. You can follow any responses to this entry through the RSS 2.0 feed. You can leave a response, or trackback from your own site.