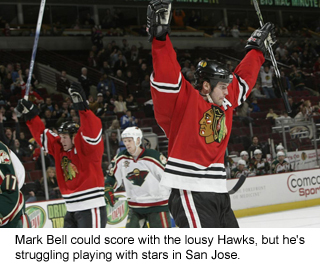 Mark Bell was the surefire fantasy sleeper of the season. I mean, seriously, how could you go wrong with a guy who almost scored 30 goals on a hopeless Chicago team after he gets put on a line with MVP Joe Thornton and Rocket Richard winner Jonathon Cheechoo? Well, what the hell do I (and a ton of other) people know? Bell has been stuck on four goals since October and has been booted to the fourth line. That’s my bad.

Speaking of Cheechoo, the Sharks are saying that his leg injury isn’t that serious and he may even skate on Saturday against Philadelphia. However, my thinking is that he’ll sit out one game just to play it safe.

Ray Emery is back for the Ottawa Senators and it couldn’t come too soon. Expect Martin Gerber to ride the pine for a while behind Emery, who has management’s faith for the time being.

Olli Jokinen has nine goals on the season, all at home. Think about that if you’re running out of roster spots for the day.

Speaking of Jokinen, he had a hat trick while growing a porn-star mustache. Coincidence? Never underestimate the power of sexy ’70s facial hair!

So far, Yanic Perrault has been an awesome pick-up for Wayne Gretzky’s Coyotes. Six points in six games, plus a great faceoff winning percentage — what more could the Coyotes ask for? Well, how about some wins for Cujo? Joseph has returned somewhat to the form he showed last season, so that explains why the Coyotes finally won back-to-back games.

Up in Chicago, Brian Boucher has been playing well, but Nikolai Khabibulin’s ready to come back. Unless Khabibulin has a disaster return, expect him to grab the reins again. Still, that won’t necessarily be a good thing in terms of wins unless Martin Havlat and Michael Handzus magically return.

The Leafs have gotten Pavel Kubina back, which is good in terms of the defense, but doesn’t mean that Kubina will be seeing the power play time that he got in Tampa, especially since Tomas Kaberle decided to actually shoot the puck over the past two weeks.

Slava Kozlov is getting press for pretty much the first time in his career, and why not? He’s got a whopping 11 points in five games.

Michael Nylander is quietly putting up another great season riding shotgun with Jaromir Jagr. Here’s a guy who is often ignored in fantasy leagues even though he gets close to a point per game, mainly because he’s an effective support player who needs to feed a superstar in order to get points. Do a sanity check in your league, especially if you’ve only got five or six teams in it, to see if Nylander’s been overlooked.

Who would have thought that Geoff Sanderson would have more points than Peter Forsberg? Forsberg broke out of his slump with points against LA and Anaheim, but it remains to be seen whether or not he’ll get back to the elite level we’ve seen him at before.

Up in Western Canada, we’ve got two teams going different ways. The Vancouver Canucks are having problems scoring and are sliding below .500. On the other hand, Jarome Iginla and Miikka Kiprusoff have come alive and pushed the Flames over .500. The X-factor? Alex Tanguay has seven points in his past five games — all assists — and it looks like he may finally be feeling comfortable up in Calgary.

By Mike Chen
This entry was posted on Friday, November 17th, 2006 at 12:10 pm and is filed under HOCKEY, Ice Chips, Mike Chen. You can follow any responses to this entry through the RSS 2.0 feed. You can leave a response, or trackback from your own site.