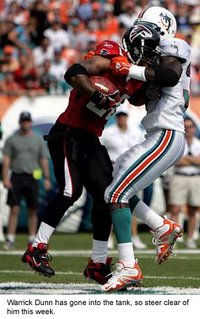 Atlanta at Baltimore – The great Mike Vick experience has come a crashing halt. That’s the sad truth. I was so very close to embracing Vick as a real quarterback. Unfortunately, it seems as though inconsistency will continue to dog him. He’s not a start in this game and neither is Warrick Dunn. Dunn has quietly regressed greatly from last season. He hasn’t had a 100-yard rushing game since Week Six. Only Alge Crumpler is a safe start while Michael Jenkins is a very weak one.

With the Ravens falling way behind early against the Titans, Steve McNair was forced to throw 47 times, more than any other week this season. That’s all well and good, but if the Ravens’ defense decides to show up at the start of the game this week, McNair will go back to tossing 30 safe passes. He’s not a fantasy start. Much like the Falcons, the tight end is a safe start, and the number one wide out is a weak one. Todd Heap and Mark Clayton for those keeping score at home.

Buffalo at Houston – As I wrote here last week, Anthony Thomas would fit right into the Buffalo game plan. He’s a big, strong back who is okay with carrying the ball 25 times. He is again worth a fantasy start. Lee Evans is also a weekly starter, despite the fact that he only has three touchdowns this season. His yardage numbers have at least made him consistent.

The Texans are doing, well, okay. Considering what this team did last season, Andre Johnson and David Carr are having miraculous seasons. You know to start Johnson, but Carr was banged up last week. If he is healthy, he has a shot to throw a couple touchdowns. And yes, this will be the game that is somehow completed a half hour before every other game is. I think this happens because they don’t take commercial breaks when no one is watching.

Chicago at N.Y. Jets – The Bears’ offense has turned into one of the more infuriating groups around. Rex Grossman throws three touchdowns one week, and then turns the ball over six times the next. I would hesitate to start him this week since the Jets’ defense is decent at getting turnovers. Thomas Jones, on the other hand, will find room to run, and remains a starter. The wide outs are hit and miss due to health problems. Both Muhsin Muhammad and Bernard Berrian have injuries, so they both need to be monitored closely up to game time. Finally, Desmond Clark is a low end starting tight end.

The Jets, meanwhile, don’t offer much to the fantasy world. Laveranues Coles and Jerricho Cotchery have had their moments, but that’s been about it. The Bears’ defense is still performing at a high level, so there’s no reason to go out of your way to start anyone in green.

Cincinnati at New Orleans – Yes, the Bengals technically lost last week, but for fantasy owners, it doesn’t matter at all. Carson Palmer and Chad Johnson played the best games of their careers, and Rudi Johnson got out of the penalty box in time to contribute just enough to make y’all happy. T.J. Houshmandzadeh took this wicked shot, so monitor his status. If he plays, he’s a fine start. Chris Henry is also a sneaky start, since he keeps catching touchdowns.

The Saints aren’t playing around anymore. This team is a legitimate fantasy bonanza. Drew Brees, Deuce McAllister and Marques Colston are all weekly starts, and Joe Horn should also be in the lineup this week. Reggie Bush actually got more total touches than McAllister last week, which is something to keep your eye on. Unfortunately, it will take more than one week to convince me he is a real factor.

Minnesota at Miami – You know that ban I had on talking about the Dolphins earlier? I’m putting it back into effect. So all I will say here is start Chester Taylor as an average second back.

New England at Green Bay – There’s no video up on YouTube, but Corey Dillon’s long run against the Jets last week was one of the uglier positive plays you will ever see. That has nothing to do with fantasy football, really, but I figured I would mention it. Tom Brady, Dillon and Laurence Maroney should be fantasy factors, but I’d leave the wide outs on the bench here.

After struggling against the Vikings’ top-ranked run defense, Ahman Green now has to deal with New England’s third-ranked run defense. Poor guy. He’s a surprising sit again after having three straight 100-yard games prior to last week. Expect good yardage numbers from Brett Favre and Donald Driver, but the touchdowns will be much harder to come by.

Oakland at Kansas City – It’s sort of a YouTube staple for me: Type ‘Oakland Raiders’ into its search function, and you’re bound to find something funny. Like, this, for example. Yeah, don’t start Randy Moss or any Raiders. Trent Green will be starting for the Chiefs, but I’d hold off on starting him just yet. The combination of rust and a good Oakland pass defense makes me think the calls for Damon Huard will intensify by Sunday evening. And I wouldn’t start Larry Johnson…

Pittsburgh at Cleveland – Somehow, Frank Gore’s first-half performance last week (148 yards and a touchdown) wasn’t the best half a running back had on Sunday. Willie Parker trotted 187 yards and galloped to two touchdowns in the second half alone en route to a 213-yard game. With the Browns’ run defense being less than good, you know to start Parker. Ben Roethlisberger has picked up his game as of late, but the Browns have been stout against the pass. Don’t feel obligated to start the former motorcyclist. He’s a weak starter at best.

It’s hard to have any kind of emotion about the Browns this season. On the one hand, they’ve been pretty bland and Reuben Droughns has been a huge disappointment. On the other hand, it’s the Browns, and what did you expect? That, and Kellen Winslow is having a surprisingly effective season. Other than the tight end, only Braylon Edwards is worth considering. He’s scored touchdowns in two straight games.

Finally, if you have any fantasy football questions in the future, send me an e-mail at AndyG@mvpff.com. I’d be happy to help!

By Andy Goldstein
This entry was posted on Thursday, November 16th, 2006 at 5:24 pm and is filed under Andy Goldstein, Gridiron Goldstein. You can follow any responses to this entry through the RSS 2.0 feed. You can leave a response, or trackback from your own site.