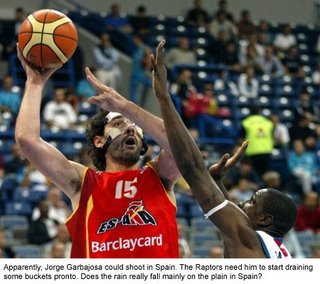 This wasn’t exactly how I was hoping this tough five-game, 11-day Western swing would begin. The Raptors threw up a stinker last night — probably their worst effort of the season to date — in getting their asses royally spanked by the Kings 107-92.

There’s no shame is losing to Sacramento in Arco Arena. After all, after hammering Detroit the other night, the Kings are off to another good start in front of their great fans at 3-0, leaving them 165-43 in Sacramento since the start of the 2001-02 season. So clearly, few teams escape this trip with a W. The Raptors know that pain all too well, as last night made it nine straight loses at Arco. You have to go back to mid-March 1997 to find the last time — in fact, it’s the only time — that Toronto has won in this building. All-time, the Raps are 1-10 here.

But there’s no excuse for the absolutely horrible effort — sparked once again by a lousy start — that Toronto offered last night. This Kings’ team is beatable. They came in near the bottom in scoring, second-worst in field goal percentage and dead last in three pointers per game. All the Raps had to do was play their game, put up some points and the rest would take care of itself, right?

Wrong. Because, alarmingly, a big component of the Raptors’ game so far is allowing the other team to score at will. And even the offensively inept Kings were able to take advantage of that, and it was aided plenty by a new wrinkle in the Toronto troubles — turnovers. The Raps couldn’t protect the pumpkin, and that recipe — poor shooting, poor defense, inability to hold onto to the ball — rarely results in victory.

This is a vital stretch for the Raptors as they play the vast majority of their games on the road between now and the end of the calendar year. If they don’t get their act together fast, they will be buried by then. At 2-4, they’ve already dropped to 11th in the conference, a game out of the eighth spot. Believe it or not, it may take a .500 record to make the playoffs in the East this year.

Although at times I felt I needed to avert my gaze from this one, I offer up my observations regardless:

The Raptors were simply never in this game. Just a horrible defensive effort compounded by turnover city. Next up, the Raps get Golden State on Tuesday night.

By RotoRob
Tags: Toronto Raptors
This entry was posted on Monday, November 13th, 2006 at 8:46 am and is filed under BASKETBALL, Courtside, RotoRob. You can follow any responses to this entry through the RSS 2.0 feed. Both comments and pings are currently closed.