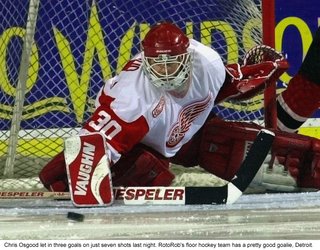 The San Jose Sharks, at 6-1, are off to their best start ever, and a big reason why is a deadly power play.

Last night the power play accounted for San Jose’s entire attack as the Sharks went 5-for-13 with the man advantage, tying a club record for PPG in a game, to whip the Wings 5-1.

The Wings are off to a sluggish start (3-3-1), and you can point to their penalty kill woes — they’ve given up eight power play goals in the past two games, and that just won’t get it done in this era of special teams.

Chris Osgood was the victim last night, and his performance didn’t exactly do much to help him win more time away from Dominik Hasek. In fact, after surrendering three goals on just seven shots in the first period, Osgood had to be pulled in favour of Joey MacDonald, who made his NHL debut. MacDonald wasn’t much better, giving up another pair of goals on 15 shots.

Milan Michalek continued his phenomenal start for the Sharks with a goal and two assists. He’s scored six times with four assists in seven games and is +4 with four PPG. Michalek is currently seventh in the NHL in goals.

San Jose’s power play surge jacked its success rate up to 27.5 per cent for the season — good for fifth in the league.

Patrick Marleau scored his first two PPG last night and he’s already got nine points, including six assists (four on the PP). Other Sharks who are seeing plenty of power play time and make excellent fantasy options include Jonathan Cheechoo (7-4-5-9, three PPG and three PPA); Christian Ehrhoff (five points, two PPG); Joe Thornton, who has yet to bulge the twine but is racking up the assists with nine — seven on the PP; and Steve Bernier, with a goal and six assists — five on them on the PP.

The Flyers took another beating last night, dropping a 4-1 decision in Tampa Bay for their fourth straight loss.

Tampa Bay’s been struggling itself, losing four of its past five heading in, so Philly coming to town was just the tonic the Lightning needed. Tampa Bay continued its absolute domination of the Flyers, beating them for the ninth straight time, outscoring them 43-16 over that stretch.

If you’re a Flyer fan like me, it’s just about paper bag on the head time, isn’t it?

Notes from the game:

By RotoRob
This entry was posted on Friday, October 20th, 2006 at 10:06 am and is filed under Rink Notes, RotoRob. You can follow any responses to this entry through the RSS 2.0 feed. You can leave a response, or trackback from your own site.