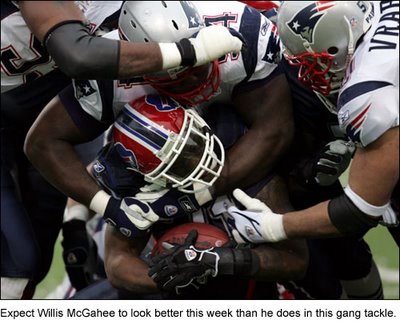 This week is ‘Say mean things about the NFL’ week for fantasy owners thanks to six teams being on their bye week. Seriously NFL, what the fungus?

Buffalo at Detroit – As expected, the Bills’ offense mostly struggled against a superior Bears’ defense last week. Chicago is a wrecking ball right now, so don’t get down on Buffalo’s offensive contingent. Willis McGahee should rebound with a decent yardage game, but a touchdown probably isn’t in the offing. Lee Evans could have one of his better games of the season. He’s a surprising start for two wide out leagues. Expect over 100 yards and a touchdown.

In case you were wondering, yes, Kevin Jones did finish with more carries than yards against the Vikings. And in case you were wondering, no, that’s not good. Keep him on the bench, obviously. Jon Kitna had been enjoying the 2006 season until last week. He threw three interceptions, mostly because he started forcing the ball after Roy Williams left with an injury. With Williams looking like a go Sunday, keep using Kitna as you had been.

Carolina at Baltimore – Unfortunately for fantasy owners, it’s been quite the defensive year through five weeks of action around the NFL. Part of that can be attributed to injuries, part of it is personnel movement, but perhaps the biggest factor is that a handful of defenses are playing as well as any defenses in league history. That’s a long-winded way of saying try to avoid Panther players if at all possible. Only Steve Smith is a decent start.

The Ravens’ offense, meanwhile, might as well be playing their defense every week. Steve McNair has struggled and only has one game with over 200 yards passing. Jamal Lewis is long removed from his 2,000-yard campaign. He’s playing better than he did when he was in jail, but he’s still a shell of his former self. Derrick Mason has had four out of five games with 50 receiving yards or fewer. None should be starting, even against bad teams. Only Todd Heap is worth starting this week.

Cincinnati at Tampa Bay – One thing that will help many fantasy owners is getting the Bengals back on the field. The Bucs’ run defense is, well, awful, so expect big numbers from Rudi Johnson. Tampa does have a good pass defense, but that’s because opponents have often been way ahead early in games. I think Carson Palmer is a solid start, and both Chad Johnson and T.J. Houshmandzadeh are worth spots.

The Bucs should also put some points up in this contest. Carnell Williams will gain over 100 yards if he’s given 25 carries, and is certainly a good option. Even Bruce Gradkowski might have a serviceable day. Just don’t start him or anything. Joey Galloway is the wide out to target. For whatever reason, he’s still the top guy.

Houston at Dallas – Yes! It’s the battle for Texas! Okay, neither squad is over .500, but that shouldn’t temper anyone’s excitement. First off, Drew Bledsoe is a bad performance or two away from being benched for Tony Romo. Then there’s Andre Johnson, who is fourth in the league in receiving yards. And Julius Jones is working on two straight 100-yard efforts. Oh, and Terrell Owens could explode at any moment. Yes, this will be a fun one.

N.Y. Giants at Atlanta – Apparently someone forgot to tell the Giants that their NFC East showdown with the Redskins last weekend was supposed to be a high-scoring affair. That doesn’t faze me, however. I think this week will be a workout for the scoreboard. The Giants will find success going against the Falcons’ pass defense. Eli Manning, Plaxico Burress and Amani Toomer are all starts. Jeremy Shockey has been banged up and it’s affected his stats, but you might not have another option. Tiki Barber will only have a good game if he becomes a factor through the air. Atlanta’s run defense will stifle the Shaun Alexander look alike.

The last time Mike Vick faced the Giants, he had over 100 yards rushing. Take into account he’s already had two games over the rushing century mark this year and you get the idea. Warrick Dunn will get his yards, but don’t expect a touchdown. Alge Crumpler remains a start, and consider Ashley Lelie if you need a bye-week fill in.

Philadelphia at New Orleans – There’s a reason the NFL season extends for more than five weeks. It’s not quite a chance for a team’s true colours to show. Take the Eagles. They’ve beaten three awful teams, won an emotional game against T.O and the Cowboys last week, and lost to the Giants. I’m an Eagles’ fan, they are my home team, but even I can acknowledge a picture-perfect schedule when I see one. Let’s wait a few more games before we name this team Super Bowl contenders.

Sorry for that NFL analysis, it rarely happens. Anyway, from a fantasy perspective, you have to love this matchup. Donovan McNabb and Drew Brees will both fill the stat sheet. Brian Westbrook, Deuce McAllister and Reggie Bush are all starts. Marques Colston and Reggie Brown are also both good options. Expect plenty of scoring on both sides.

Seattle at St. Louis – I am quite conflicted about this game. On one hand, it is the NFC West, which has long been a fantasy-friendly division. Unfortunately for fantasy owners, both of these teams have disappointed on the offensive side of the ball. The Seahawks will once again be without league MVP Shaun Alexander. Expect Matt Hasselbeck and the passing game to click this week. Darrel Jackson is a safe start, and Deion Branch is a sneaky one.

Over the last three games, Marc Bulger has six touchdowns and two 300-yard performances. His success will continue, but Steven Jackson’s won’t against are very strong Seahawks’ run defense. Torry Holt and Isaac Bruce are starts, but don’t pay no mind to Kevin Curtis.

By Andy Goldstein
This entry was posted on Saturday, October 14th, 2006 at 2:16 am and is filed under Andy Goldstein, Gridiron Goldstein. You can follow any responses to this entry through the RSS 2.0 feed. You can leave a response, or trackback from your own site.