Who Will Stop the Yanks? 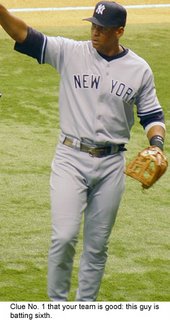 As much as it pains to me to say so, the Yanks enter the postseason as the odds-on favourite to win the World Series. As unpalatable as it may seem, is there really any team that is capable of standing in the way of the Pinstripers’ 27th World Series title?

For frig’s sake, this is a team that has arguably the best player of our generation batting sixth. Their ninth place hitter almost won the batting title. Sure, there are questions about the pitching, but this lineup is relentless.

When the Yankees open against Detroit tonight — amazingly, the first time the two teams have ever met in the playoffs (which says more about Detroit’s futility over the years than anything else), manager Joe Torre’s lineup will have Alex Rodriguez batting sixth.

This has created quite a commotion among the New York media, but then again, everything that involved A-Rod seems to create a commotion. Still, it’s pretty shocking when a .290 hitter with 35 homers and 121 RBI has to hit sixth. But Rodriguez’s post-season failures and inability to handle pressure situations is famous in the Bronx. This is the team deep enough to be able to move him down — clearly a message that says, “Alex, don’t try to carry the team” — and still be potent.

Gary Sheffield, out most of the year with wrist problems and learning a new position (first base), gets plugged into reinging AL-MVP A-Rod’s normal clean-up spot. Sheffield, who has over 1,500 RBI, reminded the media that he knows a thing or two about wielding the lumber when they dared question him about batting cleanup: “I’m not some castoff,” he said. “I’ve done a few things in this game. Don’t forget who you’re talking to, brother.”

Whether Sheffield can deliver in the four-hole or not, this is a huge playoff for Rodriguez, who’s future in the Big Apple may ride on it. If he struggles again this October, you can bet those trade rumours will really heat up. Don’t be shocked if he’s an Angel next year.

But for now, let’s sicken ourselves by checking out the highest-paid lineup in baseball, a team that has a current or past All-Star at every single position. Feel free to prepare a bucket for this vomit-inducing lineup of doom (at least for the Bosox’ fans or Yankee haters among us):

Oh yes, there are the pitching questions. Randy Johnson’s back could be a problem, but for now, he’s good to go for Game 3. Mariano Rivera, out for three weeks down the stretch, will be limited to one-inning appearances, and that could prove problematic if Scott Proctor, Kyle Farnsworth et al., don’t step up this postseason. But given that this team has perhaps the greatest playoff batting lineup ever assembled, I find it hard to envision that it couldn’t just bludgeon its way past any pitching issues.

And so we sit here, trying to cling to some hope that a team that’s won nine straight AL East titles can somehow meet their playoff demise. But considering they beat Detroit five out of seven this year, outscoring them by 15 in the process, it’s hard to imagine that the Tigers will offer anything more than a whimper of resistance against this beast.

By RotoRob
This entry was posted on Tuesday, October 3rd, 2006 at 11:16 am and is filed under BASEBALL, RotoRob, Team report. You can follow any responses to this entry through the RSS 2.0 feed. You can leave a response, or trackback from your own site.