The Battle for Second 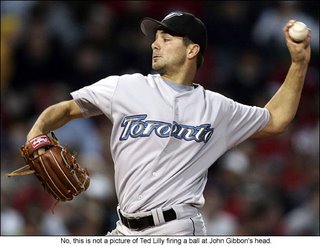 Talk about a letdown.

When the RotoWidow and I bought tickets for this weekend’s Boston-Toronto series way back when, we were expecting this to be a very exciting weekend. Would the AL East be on the line? At the very least, we assumed, the Wild Card could be decided by these four pivotal games.

Instead, we are treated to the battle for second place in the AL East. Whoop-de-freakin’-doo!

Disappointed, but undaunted, as the soldiers that we are we were still compelled to head down to the Rogers Centre and do our part to cheer on the Bosox. Out came the Red Sox jerseys and caps. I swapped in my Bosox shoelaces into my shoes. (Well, truth be told, I hadn’t actually switched back to my regular shoelaces from the last series in Toronto. A friend of mine had needed an extra pair of shoelaces — you don’t want to know why — so I gave him my regular ones.)

We enjoyed last night’s 7-1 romp by the Bosox, and are heading down shortly for game two, with Sunday and Monday still on tap. So needless to say, my time is limited this weekend, so I will curtail my post to quick observations from last night. Let’s get to it, as there’s a street dog with my name on it waiting for me:

By RotoRob
Tags: Toronto Blue Jays
This entry was posted on Saturday, September 23rd, 2006 at 11:50 am and is filed under BASEBALL, Game report, RotoRob. You can follow any responses to this entry through the RSS 2.0 feed. Both comments and pings are currently closed.