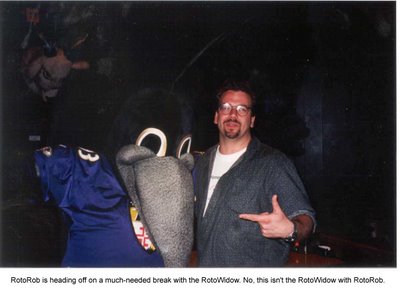 It’s been two and half months of madness here at RotoRob, so the RotoWidow and I are taking a well-deserved break. What’s that? Abandoning the site? Hell, no.

We’re simply leaving you in the capable hands of Andy and Mike. Here’s the schedule:

As you can see, we’ve got it all covered here at RotoRob. So don’t touch that dial.

By RotoRob
Tags: Mikko Koivu
This entry was posted on Wednesday, September 13th, 2006 at 9:00 pm and is filed under RotoRob. You can follow any responses to this entry through the RSS 2.0 feed. You can leave a response, or trackback from your own site.