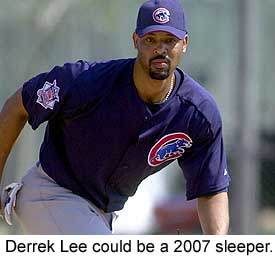 Could September provide relief to what has been an extremely ugly show for Cubs’ fan this season?

The National League’s worst team committed six errors on Tuesday night, fell behind 7-0, yet somehow pulled out a win. The club’s improbable 9-8 win over the Dodgers gave Chicago something it hasn’t had since the middle of August ‘ back-to-back wins.

Surely, that must be a sign the team could yet finish this forgettable season on a high note. In between winning streaks, after all, a 3-18 streak plummeted the Cubbies below even Pittsburgh for the basement of the NL Central.

The pitching staff has once again been decimated by injuries. Only the lowly Devil Rays have scored less runs in all of baseball. There’s not much to hang your hat on. But let’s try anyways.

For starters, Derrek Lee is back. No, he has not delivered even a small fraction of what you expected when you took him in all likelihood with a top 10 pick this year. NL-only leagues probably grabbed him as high as third given his dominating 2005 season.

But with six RBI in the past two games, Lee looks like he plans on trying to make up for lost time. Monday he crushed two balls with the kind of authority he hasn’t shown all season. His 18th career multi-homer game and first in over a year suggests Lee is still a force to be reckoned with.

The big question is what kind of value will Lee have heading into 2007? After signing a huge five-year deal before this season, he’ll be stuck in Chicago for several seasons, for better or for worse.

He’s obviously no longer a top 10 pick in mixed leagues, but with four homers, 13 RBI and a BA of almost .310 so far in September, Lee looks like he could be a 2007 sleeper. That seems ridiculous, of course. The thought that a top 10 player could fly under anyone’s radar is crazy. But plenty of owners will fixate on his lost season and pick someone else.

Don’t play that game. Whatever you do, do not let Lee fall below the 25th pick in next season’s draft. If he’s still on the draft board and you pass on him with a late second-rounder or early third rounder, you’ll be sorry.

By RotoRob
Tags: Chicago Cubs
This entry was posted on Wednesday, September 13th, 2006 at 1:56 pm and is filed under BASEBALL, Player profile, RotoRob, Team report. You can follow any responses to this entry through the RSS 2.0 feed. Both comments and pings are currently closed.