Giants Look to Their Ace to Close Ground 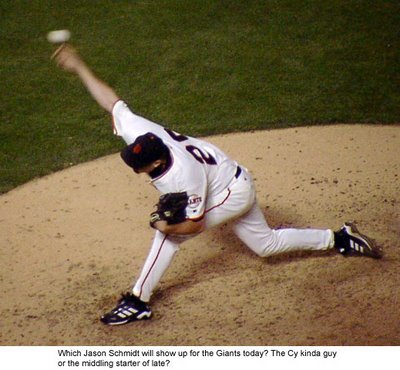 Written off from playoff contention just a month ago, the San Francisco Giants have a golden opportunity to go right after their main competitors today with their ace on the mound.

The Giants have been among baseball’s most inconsistent, difficult to assess teams this season. They’re in the race, they’re not. They’re back in it. Maddening for fans and prognasticators alike.

Between July 23 and August 13, a 3-16 run made San Francisco the worst team in baseball and left them nine games under .500 and in dead last in the NL West, seven and a half games behind division leader Los Angeles and six and a half out in the Wild Card race. It looked like you could stick a syringe, so to speak, in the Giants’ season.

Since then, however, led by a rejuvenated Barry Bonds and a scorching Ray Durham, the Giants have been baseball’s best team with a 17-7 mark. San Francisco’s great run has it back over .500 at 71-70, sitting a mere four games behind the Dodgers in the West, but more importantly, only two and a half back of NL Wild Card leading San Diego, with just Philly between the two Western rivals.

Now San Francisco has the advantage of controlling its own destiny by going head to head with the Padres this weekend at AT&T Park. The Giants rode Matt Cain’s excellent effort Friday to take the opener 4-0, for their fifth straight win over San Diego and 10th in the last 11 tries. And this afternoon, San Francisco sends its ace, Jason Schmidt, to the mound as it seeks its first six-game winning streak over the Padres in 11 years, but more importantly looks to shave San Diego’s tenuous Wild Card lead.

That brings us to Schmidt and the (quite buried) purpose of this missive. Schmidt, 11-8, 3.39, has had a nice comeback season as he sort of settles in between 2004’s dominance and 2005’s disappointment.

Notwithstanding his last outing (eight hits, three runs over seven innings), Schmidt has not looked sharp of late. He was absolutely rolling in the first half — especially in May and June — but a 4.62 ERA since the break is disconcerting.

Whichever Schmidt takes the mound today — staff ace or middling starter — there’s no denying what a great recovery he’s made after a 2005 season (4.40) that seemed to suggest he was no longer among the NL’s elite pitchers.

While he has not been able to duplicate his Cy Young-type 2004 showing, there’s nothing wrong with these stats: Schmidt is fifth in the NL in holding opponents to a .234 mark; sixth in ERA; sixth in complete games; and he’s also in the top 10 in strikeouts and WHIP (despite 69 walks, which is also a top 10 total).

He’s aleady thrown more innings than he did in 2005 when he struggled with some health issues, and while his strikeout rate (7.49 Ks per nine) has dropped for a second straight year (again, suggesting a reduction in dominance levels). Schmidt has improved his ability to record outs quicker in the count and to get through innings with less work. He’s also shown much better command in 2006 compared to last year.

Schmidt has morphed into a bit more of a flyball pitcher over the last couple of years but, thanks to an extent to his home park, this has not manifested itself into a home run problem.

Of course, fantasy owners may need to be concerned about his long-term results should this be a trend. Remember that Schmidt is a free agent after the season, and there’s a good chance he will land elsewhere, and — depending on where that is — it could have a huge impact on his 2007 fantasy value.

By RotoRob
This entry was posted on Saturday, September 9th, 2006 at 1:10 pm and is filed under BASEBALL, Player profile, RotoRob. You can follow any responses to this entry through the RSS 2.0 feed. You can leave a response, or trackback from your own site.