NFL Week One Games (Part One) 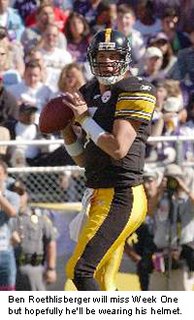 It’s time for football, so sit back with your beverage and hoagie (or sub, or grinder, or whatever you may call it) and enjoy this week one fantasy preview.

Miami at Pittsburgh – With quarterback Ben Roethlisberger out, the reigning champions turn to Charlie Batch as the replacement. If you’re starting Batch, I am deeply sorry. Wide receiver Hines Ward was upgraded to probable (hamstring), but expectations for him must be tempered. Tight end Heath Miller is a starter, but again, don’t anticipate the world with anything-but-primetime-Charlie throwing him the ball. Running back Willie Parker remains a solid fantasy start since his workload will most likely increase.

Dolphins quarterback Daunte Culpepper is a marginal start this week. He’s looked good in the preseason, but question marks remain from his brutal 2005 injury. Couple that with a ferocious Steelers defense and you might have a better quarterback option. Running back Ronnie Brown is a first-round fantasy back, so you’re going to start him. He might struggle to get to 100 yards, however. Wide out Chris Chambers is a great red-zone target. He has a decent chance at a touchdown, but don’t count on huge receiving numbers.

Atlanta at Carolina – Quarterback Mike Vick struggled mightily last season against the Panthers, but his legs remain a viable weapon. His passing numbers won’t impress anyone, but if he tacks on 50 rushing yards and a score, he becomes a marginal start. Running back Warrick Dunn is another weak starter thanks to Carolina’s fourth-ranked run defense. The Falcons scat back is always a threat for a long touchdown, but if it doesn’t happen, his statistics will leave much to be desired. Avoid all of Atlanta’s receiving options outside of tight end Alge Crumpler, who will get about 75 yards and a score.

The Panthers go into this weekend not knowing whether wide receiver Steve Smith is a go or not. He tweaked his other hamstring in practice and is currently listed as questionable. If he can’t play, it will adversely affect how quarterback Jake Delhomme does. Atlanta’s pass defense was respectable, so monitor the situation closely as game day approaches. Wide out Keyshawn Johnson becomes an interesting play. If Smith is out, someone will be in line for a boost in receiving yards. That guy is Keyshawn. Jake will just have to get him the damn ball. Regardless of Smith’s status, running back DeShaun Foster is a sneaky start. He had his way against the porous Falcons run defense twice last season.

Baltimore at Tampa Bay – Get ready for a defensive struggle. Quarterback Steve McNair will move the ball a bit against a tough Tampa defense, but it will tighten up in the red zone. Leave McNair on your bench if you can afford to. Running back Jamal Lewis is a bit of a sleeper candidate, but the Bucs were sixth against the run last season. The one-time jailbird (low blow?) might get a short touchdown, but that’s about it. Wide receiver Derrick Mason is a marginal start in deeper leagues. Tight end Todd Heap will be the main receiving threat for the Ravens.

The Bucs won’t exactly have a picnic on offense either. Quarterback Chris Simms is young and probably still a bit outmatched against the stellar Ravens defense, a group that was top 10 against the pass last season. Baltimore’s run defense also held a lofty rank, which means running back Carnell Williams will have trouble getting past the 100-yard mark. He is, however, a threat for a touchdown. While I prefer wide out Michael Clayton this season, Joey Galloway might be a better threat in this game. Galloway is more of a deep option, which is the only chance either guy will have a start-worthy performance. If you go with one, go with him.

Buffalo at New England – Keep an eye on Bills quarterback J.P. Losman. He has clicked this preseason with wide out Lee Evans. Don’t start Losman, but take a wait and see approach. Running back Willis McGahee had over 130 rushing yards in the first meeting with the Patriots last season and then had one of the worst games of his career in the second tilt. Expect statistics closer to the first game as the self proclaimed ‘best back in the NFL’ has quite a bit to prove. Evans is a great start. The third-year wide out seems primed for a breakout campaign.

The Patriots don’t really have anyone to throw the ball to, but Tom Brady isn’t a golden-boy for nothing. He’ll spread the ball around to his sad receiving core and have a passable game. Running back Corey Dillon is a great sneaky start against the 31st-ranked run defense from last season. He’ll get as many carries as he can handle. Avoid all wide outs, but consider tight end Ben Watson. He’s a prime sleeper since he’s the only legitimate option Brady will have all game.

Cincinnati at Kansas City – Get your ‘Activate-Fingers’ ready. This game should prove to be one of the more high-scoring affairs from Week One. Quarterback Carson Palmer should dissect the 30th-ranked pass defense from last season, making both wide outs Chad Johnson and T.J Houshmazilly great options. Running back Rudi Johnson should cross 100 yards and have a shot at one or two touchdowns.

Quarterback Trent Green might be old, but he can still hit open receivers, of which there should be plenty for the Chiefs. Running back Larry Johnson is my number one fantasy pick for this week, but do you really need me to tell you to start him? Wide receiver Eddie Kennison is a sneaky start, and tight end Tony Gonzalez is a safe one. Essentially, start as many legitimate players from this game as you can.

Denver at St. Louis – Quarterback Jake Plummer is a good start going against a terrible Rams defense that gave up the third-most passing touchdowns last season. The running back situation is still something of a mess (thanks Coach), but the prime ball carrier should be Mike Bell. If he gets 20 carries, it’s an attractive play. Wide receivers Javon Walker and Rod Smith are both solid starts. Rookie tight end Tony Scheffler won’t be on anyone’s roster, but I think he will be a threat for a touchdown.

The Rams still have a potent offense that will put up points in this game. Quarterback Marc Bulger will accrue a good stat line, as the Broncos pass defense is a bit overrated. They cause interceptions, but they give up yardage and scores as well. Running back Stephen Jackson has one of the more interesting battles in Week One. The Broncos run defense is stout, but Jackson is the kind of physical back who could take a beating and give some back. He’s a start, but temper expectations. Wide outs Torry Holt and Isaac Bruce are both starts, but I’d wait and see with Kevin Curtis.

New Orleans at Cleveland – There are a couple intriguing players in this contest. Quarterback Drew Brees might struggle against a capable Browns pass defense which ranked fourth in the league last season. Consider benching him if you have a comparable talent with a better matchup on your pine. Running back Reggie Bush is the backfield member to start. He should get 15-20 total touches and will certainly make the most out of them. Wide out Joe Horn is a marginal starter.

Browns quarterback Charlie Frye should not crack anyone’s starting lineup, but running back Reubuen Droughns should. The Rams are not great defensively, and the running room could be spacious. Sit wide out Braylon Edwards and tight end Kellen Winslow. Both are coming back from injuries and might need a couple weeks to get their feet under them.

N.Y. Jets at Tennessee – Wow. Just, wow. Wide out Laverneous Coles is a maybe. For the Titans, Chris Brown might only be healthy once all year, so he’s a sneaky start in this game. Wide outs David Givens and Drew Bennett are not spectacular, but they should get the job done. That’s all I can stomach from this game.

Check back tomorrow for the rest of the Week One games. In the meantime, head over to MVP for weekly quarterback and running back rankings (wide receiver rankings will also be up prior to game time).

By Andy Goldstein
This entry was posted on Thursday, September 7th, 2006 at 11:56 am and is filed under Andy Goldstein, FOOTBALL. You can follow any responses to this entry through the RSS 2.0 feed. You can skip to the end and leave a response. Pinging is currently not allowed.