The Malkin and Crosby Show! 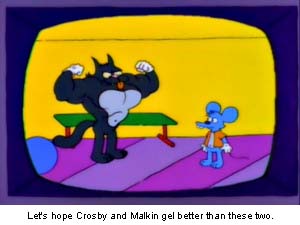 (Sung to the tune of The Itchy and Scratchy Show)

They pass
And score!
And pass and pass and score!
Pass pass pass
Score score score
The Malkin and Crosby Show!

So it’s finally happened — Evgeni Malkin, labelled the “Best Player Not In The NHL” by umpteen hockey observers, signed his official rookie contract. What does this mean for fantasy players? Well, it may be difficult for him to reach the heights of fellow Penguin Sidney Crosby or Washington Capital Alexander Ovechkin in their respective rookie campaigns. However, Malkin has one advantage — unlike Crosby or Ovechkin, Malkin will actually have some help.

With Crosby effectively being recognized as one of the top players in the league, there’s no doubt that he’s the No. 1 centre of the Penguins. That means that Malkin won’t see the top defensive units of the opposition unless he goes bonkers and puts up rookie numbers to rival, well, um, whatever supreme being you believe in. Malkin should be allowed to grow into his role as centre 1A with the spotlight firmly on Crosby.

Crosby has developed good chemistry with Colby Armstrong, so it wouldn’t be surprising to keep those two together. That means there’s a good chance that Malkin could have veteran Mark Recchi on his side. This would probably be a good fit, seeing that Malkin’s new to the league and could use a skilled mentor riding shotgun with him.

If you’re in a keeper league, the top players in the league — Crosby, Ovechkin, Joe Thornton, etc. — will most likely be taken and the only players available to draft will be rookies and second-tier players. Because of this, there’s not a lot of risk in drafting Malkin first overall. Considering that Malkin’s talent alone should make being at least a point-per-game player throughout his career, he certainly won’t be a worse pick than someone who may get 60-80 points (depending on how many keepers your league has). Malkin may also get time on the power play with Crosby, so there could be some bonus points involved if your league takes special teams into consideration.

If you’re not in a keeper league, then there’s certainly no need to waste a first (or second) round draft pick on him. If your only concern is this season, there are many players who are less of a risk than Malkin. I’m predicting that Malkin will finish the season with 85 points. The top scorer in the league should get somewhere between 120 and 130. With other positions in consideration, such as the need for a No. 1 offensive defenseman, Malkin can drop down on your priority list. For me personally, in a non-keeper league, I’d place about 40 or so players ahead of him when drafting across all positions. There are plenty of scoring centres out there, and Malkin won’t realize his full potential just yet in his rookie year.

By Mike Chen
This entry was posted on Wednesday, September 6th, 2006 at 9:48 pm and is filed under HOCKEY, Mike Chen. You can follow any responses to this entry through the RSS 2.0 feed. You can leave a response, or trackback from your own site.