An All-Star on the Waiver Wire 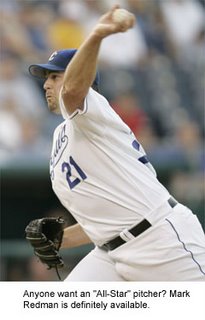 Looking for an All-Star pitcher to add for your stretch run? I’m talking about a 2006 All-Star, that is.

Well, here’s one that in all likelihood is on your AL-only league’s waiver wire, and certainly is if you play in a mixed league.

The question is, how does a starting pitcher make the All-Star game in a season when his ERA is the worst of his career, he has a WHIP of 1.55 and he’s allowing his opponents to hit over .300 against him?

Simple. When you play for the Kansas City Royals, with those numbers, you are an All-Star. And that’s how Mark Redman will go down as a 2006 All-Star, regardless of the fact he’s a mediocre pitcher at the best of times who is suffering through the worst year of his career.

Redman rode one good, well-timed month to his selection. He went 5-0, 3.74 in June, at a time when All-Star selectors were paying the most attention, and that’s why a pitcher with 60 Ks against 52 walks is an “All-Star.”

Redman has actually garned fantasy attention in AL-only leagues this week, after throwing a five-hit shutout against the Twins on Tuesday. So that means you want him active this afternoon against the White Sox, right? Uh, no.

Before that gem on Tuesday, Redman had absolutely struggled in August, so it’s hard to believe he’s suddenly useful again, not without seeing some longer-term results first.

One thing I find amazing is that Redman was actually a discussed trade commodity at the deadline, as several teams, the Jays among them, sought to add the veteran lefty for their playoff push.

In retrospect, how bad do you think the Royals wish they had rid themselves of Redman and his $4.5-million salary? Redman is a free agent after this season, and something tells me he won’t have much luck matching the three-year, $11-million deal that Oakland gave him.

By RotoRob
This entry was posted on Sunday, September 3rd, 2006 at 1:28 pm and is filed under BASEBALL, Player profile, RotoRob. You can follow any responses to this entry through the RSS 2.0 feed. You can leave a response, or trackback from your own site.