The Regression of a Minor Leaguer 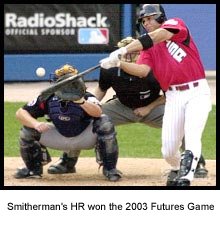 He was in the midst of a season that would include his first taste of not only Triple-A, but a 21-game major league trial; a year that would be highlighted by recognition as the Reds’ Minor Leaguer of the Year and national exposure for hitting the game-winning home run in the Futures Game.

Indeed, after that dominating Double-A performance (.310, 19 homers, 11 steals) before his promotion to Triple-A , Smitherman looked like a can’t-miss prospect and serious keeper league selection.

Well, plenty can change in three years because since then, Smitherman has not returned to the majors. In fact, this season, he hasn’t even played above Double-A ball as his career has spiralled into a serious mode of regression.

Somewhat surprisingly, the Reds tired of their 23rd round pick from 2000, cutting Smitherman free this spring. The 6’4″, 235-pounder caught on in the Padres’ organization, and has spent the season at Double-A Mobile.

Has the change in scenery helped? Hell, no.

Smitherman has struggled badly this year, with just an 825 OPS through 79 games. At this point, if he has even a three-year run as a fourth or fifth major league outfielder, that would be surprising. Smitherman turns 28 on Friday and is batting just .176 over his last 10 games, so he certainly does not look ready to even head back to Triple-A.

Smitherman is a good illustration of how a very fine-looking prospect can suddenly become an organizational player after slipping off track for just a year or two. When you’re picking prospects to line your keeper league system with, you need to beat the bushes hard to weed out the Stephen Smithermans from the Joe Mauers of the world.

By RotoRob
This entry was posted on Sunday, August 27th, 2006 at 5:34 pm and is filed under BASEBALL, Player profile, RotoRob. You can follow any responses to this entry through the RSS 2.0 feed. You can skip to the end and leave a response. Pinging is currently not allowed.