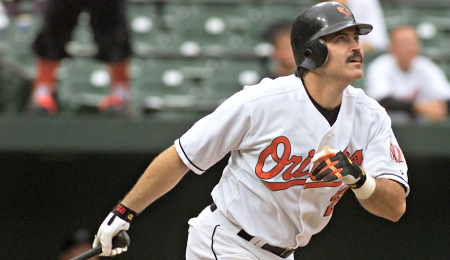 We’ve been going to Jays’ game pretty well since the inception of the club back when floods were in and if you didn’t own a pet rock, you were a nobody.

Or so we thought.

Last August, a friend of ours from our roto league invited a group of us down to see the Jays-Orioles game. He had fantastic tickets right behind the Orioles’ dugout and it was sure to be interesting as Rafael Palmeiro had just returned from his suspension for testing positive for steroids.

You had to know the fans were going to give it to him. But what we never saw coming was the sheer vehemence in which the Toronto crowd laid into him. We admit, our group were key instigators in the torrent of insults, haranguing and… well… needling of Palmeiro. It was incessent and rather vicious at times.

After his first at-bat, we noticed Palmeiro wearing ear plugs. Many others in the crowd did as well, and this just sent everyone over the edge. We’ve never been at a sporting event where the actual game seemed so secondary to the negative attention being heaped on one individual player. It was shocking, especially from a crowd always considered so tame.

The treatment Palmeiro got was noted by major sports media outlets everywhere. In fact, Palmeiro skipped the rest of the series, ostensibly to rest his ailing ankle. Less than a week later, the Orioles sent him home as he was proving a distraction to the team. In fact, Palmeiro has not played a game since.

Did we play a small part in booing him right out of baseball? Certainly the venomous crowd was a factor.

The Orioles are in town again, playing a weekday afternoon contest at the Rogers Centre. Despite the awkward start time and the fact that both of these teams are probably playing out the string at this point, over 34,000 showed up. (Well, at least that’s how many paid to see the game… those figures always seem inflated compared to actual butts in the seats.)

Today, it was Miguel Tejada’s turn to face the unruly Toronto crowd. He was having a pretty crappy day all around — 0-for-4 with a pair of strikeouts. On Tejada’s first whiff, he yelled and slammed his bat on the plate. Later, he struck out on a ball in the dirt and was promptly thrown out at first. The Jays’ fans started giving him the gears on his way back to the dugout and Tejada responded by flipping the bird at a fan of the other Birds. It wouldn’t shock us if a fine were in the offing over that one.

And no, we were not in attendance today, so don’t point or do otherwise with any fingers at me.

But these two episodes have made us rethink the temperament of Toronto baseball fans. Perhaps the city is about to enter a golden age of unruliness. Who knows? Maybe the Rogers Centre security will soon have more to concern themselves with than whether the bottle of water you’re bringing into the stadium is larger than 600 ml.

By RotoRob
Tags: Baltimore Orioles, Miguel Tejada, Rafael Palmeiro, Rogers Centre, Toronto Blue Jays
This entry was posted on Wednesday, August 9th, 2006 at 10:40 pm and is filed under BASEBALL, RotoRob. You can follow any responses to this entry through the RSS 2.0 feed. Both comments and pings are currently closed.