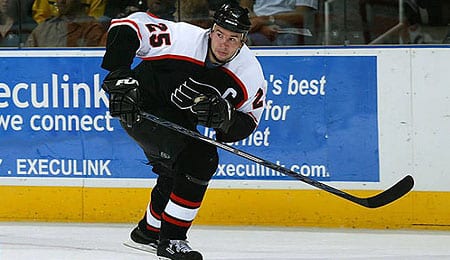 Will Keith Primeau be able to overcome his concussion problems?

Switching speeds for a moment, we remind hockey fans that former Philadelphia Flyers captain Keith Primeau is still questionable heading into the 2006-07 season after missing most of last season with a nasty concussion.

At one point last season, he was practicing while wearing a smoked visor, because his eyes were so sensitive to light. When we heard that, we assumed we had seen the end of Captain Keith.

And lest you too are suffering from concussion-like symptoms and have forgotten what a stud Primeau was back in the 2003-04 playoffs, we came across this video montage to help refresh your memory.

The quality leaves something wanting (was this filmed in Super 8???), but you can’t beat the memories if you were a fan of Primeau’s dominant, bruising style. And hey, nothing wrong with the song, either. (Is using “Dream On” a trend, though? We recently saw an Alexander Ovechkin highlight montage that used the same track. We assume this was created by a different author given the disparity in quality. But…?)

By RotoRob
Tags: Alexander Ovechkin, Keith Primeau, Philadelphia Flyers
This entry was posted on Thursday, July 6th, 2006 at 11:56 am and is filed under HOCKEY, RotoRob. You can follow any responses to this entry through the RSS 2.0 feed. Both comments and pings are currently closed.