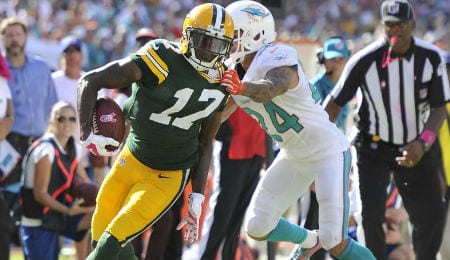 Last year, one of those players was rookie running back Zac Stacy. Stacy busted out for his second 100+ yard game in Week Nine and didn’t look back, offering RB1 value down the stretch to whichever savvy owner picked him up.

So who will the rookie boomers be in 2014? For starters, take a trip to Wisconsin. Rookie receiver Davante Adams has worked himself firmly into the WR3 slot for the Packers, and that designation means more in Green Bay than anywhere else, as the Pack run more three-receiver sets than any other team. Plus, the Packers are entrenched in an uphill battle to win the NFC North (despite being +450 favourites to win the NFC), so every game will matter down the stretch.

Adams for his part has played well, but his stats may be due for a boost for a couple reasons. For one, he seems to have earned Aaron Rodgers’ trust, an important element for the exacting quarterback. Adams has had 18 targets in the last three weeks, including a team-high nine in Week Eight in New Orleans. For another, Adams is playing behind two elite receivers that have struggled with injuries. Randall Cobb has started 14 games in the last two seasons, and Jordy Nelson was healthy for just eight games last season. One injury to either stud and Adams becomes a locked-in WR2.

It was clear even at training camp that this kid knew how to run routes (see video below).

In New England, meanwhile, rookie Jonas Gray may be ready for his close up. After Gray touched the rock 17 times in Week Eight, it seems Coach Bill Belichek will go with the young back in place of the fumble-crazy Stevan Ridley down the stretch. Gray out-touched Shane Vereen in Week Eight 17-8, and while it’s hard to ever gamble on a Belichek backfield option, Gray is worth grabbing to see how this plays out.

Lastly, don’t sleep on Donte Moncrief in Indianapolis. The rookie seems to have slipped into the WR3 slot for the league’s most productive Fantasy quarterback, and saw 12 targets in Week Eight against Pittsburgh. If you’ve got room to be patient through the Colts’ bye in Week 10, now is a great time to get in on the Colts aerial game.

Now it’s your turn. Let us know in the comments below which rookies you’re expecting to come up big in the second half.