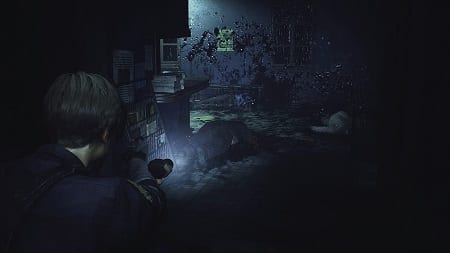 This hallway does not look sketchy or horrifying in any way.

As a series, Capcom’s Resident Evil has changed dramatically over the years, beginning as a slow-paced game that demanded judicious use of items and then slowly morphing with big changes occurring in the fourth (no more static backgrounds), fifth (a legitimate action game) and seventh (switch to first person) mainline installments.

Of the three original survival horror entries (well, five if you want to count Code: Veronica and RE0), Resident Evil 2 was the pinnacle. It built on what worked in the original, added a two-part parallel campaign, and just nailed the mix of atmosphere and gameplay. Twenty-plus years later, Capcom has given it the full remake treatment.

As expected, RE2‘s tank controls have been completely scrapped in favour of a modern third-person setup with manual aiming and full camera control. This is no shooter, however, as ammo remains at a premium, and the game’s reticule blooms when moving, meaning you’ll need to stop and line up your shots to fire accurately. While it can be frustrating, the tension and pressure it creates when enemies are bearing down on you is critical to that survival horror feel.

There isn’t a ton of difference between playing as Leon and Claire, but each one carries a unique set of weapons that handle differently. Although it could just be our personal preference, Claire seems to come out ahead with the grenade launcher — a deadly weapon at any range that can equip acid and flame rounds — versus Leon’s shotgun, which feels disappointingly impotent much of the time.

Both share the same defensive capabilities, able to equip a knife or grenade (flash or frag) that can be used when grabbed by enemies. It works well except that sometimes the game will switch your equipped item automatically, causing you to lose a valuable grenade on a lowly zombie. You don’t run very fast, either, and there’s no evasive action available. That’s unfortunate when you consider how many times avoiding enemies is the prudent move.

Give Capcom credit, it knows how to update its classics. Remade from the ground up for modern consoles, Resident Evil 2 on the Xbox One X is a quantum leap forward, comfortably outdoing the excellent work when the original Resident Evil was redone for Gamecube. The developers deftly walk the line of keeping the bones of RE2 circa 1998 while adding and expanding in ways that make sense. It looks spectacular.

Gore has also been increased considerably with zombies dying ever more gruesome deaths as limbs are severed and heads blown apart. There are some newcomers as well, including an infected reptile (of unusual size) and a new plant-based zombie that’s among the creepiest the series has to offer. The remake also gets a lot of mileage out of its beautiful lighting, which makes venturing through unlit areas consistently harrowing.

Campy voice acting was a staple of early RE titles, so it’s no surprise that’s been cleaned up, though most of the better performances come from tangential characters. The music and sound effects are great, though the game earns a demerit for how zombie moans come through in a way that never helped us locate them — it always seemed like they were right on top of us, even when they weren’t.

Although it’s not as convoluted as say, Metal Gear, the storyline of the Resident Evil series has never been its strong suit. That’s the case with RE2 as well as ultimately it comes down to Leon and Claire getting stuck in Raccoon City during a zombie outbreak and doing what they need to do to survive and escape. Along the way you’ll have to deal with the nefarious Umbrella Corporation and the Birkins, who created the G Virus. It’s fine for what it is, but the overbearing moment-to-moment tension is why it works.

As with the original, RE2 contains two intertwined stories, though unlike the 1998 version none of your decisions seem to carry forward; back then, if you took certain items on Leon’s story they wouldn’t be there for Claire and vice versa.

It’s actually one of the game’s top disappointments that the two scenarios play so similarly. Yes, you’ll get a couple of unique locations, different secondary characters (Leon gets Ada Wong, Claire gets Sherry) and weapons, but puzzle solutions and big fights are largely identical.

Capcom also made the odd decision to take the signature hook from Resident Evil 3 and use it here, having the Tyrant stalk you at various points throughout the game. We weren’t big fans of it in RE3, and always felt it was a major reason RE4 represented such a seismic shift, so having him return was a questionable choice.

Our other notable frustration with the remake is how much damage zombies absorb. Yes, item management was always part of early RE games, but Capcom has really dialed it up with a knife that degrades and breaks, and enemies that can take a half-dozen head shots only to grab you on the way by. It feels more pronounced with Leon, due in large part to how much more effective the grenade launcher is than the shotgun.

Despite those issues, Resident Evil 2 delivers a tight, well-paced experience that’s heavy on atmosphere and creates legitimate anxiety when you start running low on ammo, making you decide whether or not it’s worth trying to just avoid the undead rather than take them on.

It took around 12 hours to finish both runs, and the option exists to play them in the opposite order. Finishing the game with the “true ending” unlocks a survival mode with Hunk in which you try to shoot your way out.

With all due respect to the more recent games in the series, this is Resident Evil. To have a classic remade and modernized with this level of care is a godsend to those that fell in love with Capcom’s original vision.