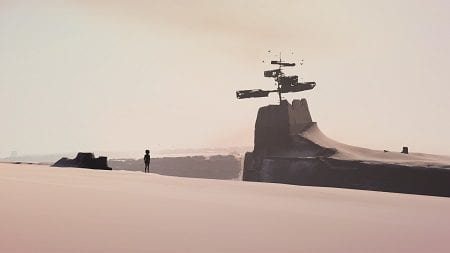 In a more literary time we were told not to judge a book by its cover. Its modern equivalent might well be not to judge a game (or film) by its trailer. While that may be sage advice, our decision to review Vane, the debut effort from Indie developer Friend & Foe, was based entirely on an intriguing 90-second trailer that reminded us of Journey. Will it live up to that impression, or will our search for fun be… wait for it… in vain?

There are two divergent activities in Vane, as you’ll spend part of your time flying around as a bird and the rest walking around as a boy. Although it can be finicky at times, flying is by far the more enjoyable way to get around. Controlling your blackbird is straightforward as you glide around, flap your wings to gain speed and caw to rally additional birds to your location.

Where we ran into trouble is when you miss whatever object you try to land on, as things handle much better when you know more or less where you’re going and how you want to get there. Reacting suddenly rarely works, and there were times when we’d overshoot a perch and struggle to get skyward again — though whether the fault laid with the controls or the annoying camera isn’t totally clear.

In human form, you basically bumble around, occasionally jumping or grabbing an object, and later on yelling at giant orbs. Why? Reasons. The pace at which you move is maddening, particular during the third stage when you and your fellow bird boys are pushing said orb around. It’s so painfully dull and riddled with glitches (more on that later) that there’s no desire to explore, and we bemoaned anything that cost us lost progress.

Presentation is undoubtedly where the game does its best work, offering up an interesting pair of locations — the vast desert and a storm-riddled tower — brought to life with soothing pastel colours and confetti-like graphics that brought memories of Tearaway to mind. The artistic style is better than the technical aspects, however, as the game is plagued by pop in and hits to the frame rate.

Significant chunks of the game are presented with ambient sound only, and that decision proves to be a prudent one as it adds weight to those moments when the music does kick in. The actual soundtrack is quite good, going heavy on the synth work.

As with the games that clearly inspired it, Vane features no structured story elements, allowing you to read into it what you will. What is clear is that you’re a boy that can turn into a bird (and vice versa) by interacting with a glowing gold substance. There’s a dark, brooding vibe to the whole thing as well, only giving way occasionally to allow a feeling of solitude to take over. We wouldn’t have minded additional context, but it’s fine for what it is.

Despite a complete lack of direction, it isn’t hard to figure out what the game wants you do, at least until the late stages. You begin as a bird, flying to glinting objects and rallying more birds to a central structure until there’s enough that their collective weight affects an object. That proves to be the main puzzle-solving device in Vane, finding enough birds or children to sit on or yell something at. If you’re thinking that sounds pretty shallow, it is.

Vane is severely lacking in good ideas for the actual gameplay, lowlighted by the insufferably long penultimate zone where you and a group of other children push a giant orb around that manipulates the world as you move — if you ever played Singularity it’s kind of like the time-bending twist from that, in which structures degrade or reform. It’s not that it’s a terrible idea, but it’s inadequate as a central theme for a section that accounts for nearly half the game.

As lacking as that area may be, at least it contains actual puzzles to solve. The final section(s) are basically you ascending and using a mask to alter the world so that you may advance. It’s a little like tuning in Dark City, but it’s a wholly linear path that affords no challenge. You eventually arrive at a gateway only to walk around it, unable to enter it even though that seems to be what the game wants (spoiler: it doesn’t).

In addition to its brevity, clocking in at around two hours, and lack of fully formed ideas, Vane is dogged by glitches. We fell through the world multiple times in several areas, necessitating restarts that sent us hurtling back to the start of the new area. That, along with other general performance issues, gives the whole thing a rushed feel.

There was some potential with Vane, but outside of the presentation it’s a mostly disappointing experience that frustrates with its pace and technical issues. If you’re still curious we’d at least recommend waiting to nab it as part of a flash sale.

By HC Green
Tags: Friend & Foe, PlayStation 4, Vane, Video Game Review
This entry was posted on Wednesday, January 16th, 2019 at 7:08 pm and is filed under Herija Green, Video Game Reviews. You can follow any responses to this entry through the RSS 2.0 feed. Both comments and pings are currently closed.