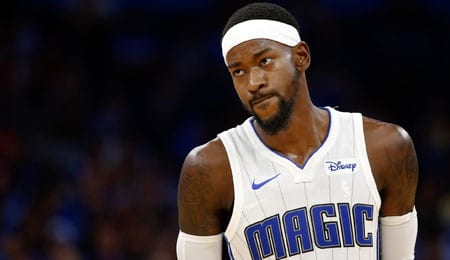 Streaky Terrence Ross is on one of hot runs. (NBA.com)

Welcome back for another week of Fantasy basketball. We’ve got some real surprises this week, so stay focused and check those waivers!

This week in the NBA: The Los Angeles Clippers now sit on top of the West, while the Rockets fight for playoff contention; the Raptors are rolling with an eight-game win streak; and Mario Hezonja disrespected Giannis Antetokounmpo in New York.

Terrence Ross, SG/SF, Orlando Magic (ESPN: 2.3 per cent; CBS: 40 per cent): T-Ross is hot! The former Sprite Slam Dunk Contest champion dropped 28 on the Warriors and 21 against Suns this week. He’s also averaging 1.8 steals and 2.5 threes over this stretch, giving him some rare value outside of points. Ross has always been streaky, most notably in 2014 when he scored 50 points while averaging under 10 for the season, becoming the first player in NBA history to accomplish this odd feat. Expect him to continue putting up high volume shots off the bench over his next few games as he attempts to keep this going. Just note that we’ve been here before. The athletic Ross has great catch and shoot skills (see video below), but has never been able to keep his numbers at the level for long. Grab him in the midst of this hot streak and pray he continues it.

Dwyane Wade, SG, Miami Heat (ESPN: 15 per cent; CBS: 31 per cent): Looking like the D-Wade of old, WoW (remember when he gave himself this joke of a nickname?), knocked down 35 against the Raptors and had 18 points, six boards and five assists against the Pelicans. Over the last week, his PT is up to 29.3 MPG compared to a season average of 25.5. Playing minutes more equivalent to what he’s played for much of his career seems to be allowing him to get more into the flow of the game and produce. If WoW (can’t stop using it and wondering if he’s never heard of World of Warcraft) continues this play he’ll be owned within most standard leagues within the month. The downside of Wade is quite obviously his age. At 36, he may rest the odd game as Miami fights for a playoff spot.

Mason Plumlee, PF, Denver Nuggets (ESPN: 1.2 per cent; CBS: 28 per cent): Over his last four games, Plumlee has two double-doubles, eight blocks (including four in one game), five steals and 39 points — not bad overall totals, although he did have a damn dud of a game against the Blazers on Friday with three points. Plumlee’s biggest downfall is his free throw shooting (46 per cent), but he can be a solid backup centre in deeper category leagues. He’s a constant double-double threat and a consistent shot-blocker; both categories that can be tough to fill, so his contributions can be huge if applied in the right format.

Marcus Smart, PG, Boston Celtics (ESPN: 6 per cent; CBS: 18 per cent): With Jaylen Brown sitting out with an injured back, Smart’s been given a recent boost in minutes. In this time, Smart is averaging an outstanding 3.5 steals, a number alone that makes him pickup worthy. Shooting above 50 per cent from the field and averaging close to a block, he is exactly what some owners need to put their team on top.

Mario Hezonja, SF, New York Knicks (ESPN: 0.2 per cent; CBS: 9 per cent): Hezonja’s been in the spotlight this week after recreating the Allen Iverson – Tyronn Lue stepover to MVP candidate Giannis Antetokounmpo. Hezonja had a pretty poor game against the Bucks, as the dunk resulting in the dramatic stepover ended up being his only basket of the night. Think what you will of his actions (he’s a fucking idiot) but, keeping our emotions out of it, he could still be a strong potential pickup in the coming weeks. This week against Philly, Hezonja came up with 17 points, five steals and five rebounds. Extremely inconsistent minutes have plagued the Fantasy seasons of just about every Knick and the young Croatian is no exception. Monitor his playing time while the Knicks figure out just what in the hell they’re doing, and you might end up with a gem no one else saw coming.

American R&B singer Roberta Flack has had a string of No. 1 hits over her long career. In 1974, she released one of her best singles ever, “Feel Like Makin’ Love.” The B-Side was “When You Smile,” which we present below…

By Brett Hamlyn
Tags: Terrence Ross
This entry was posted on Sunday, December 2nd, 2018 at 10:12 pm and is filed under BASKETBALL, Brett Hamlyn, The Wire Troll. You can follow any responses to this entry through the RSS 2.0 feed. Both comments and pings are currently closed.