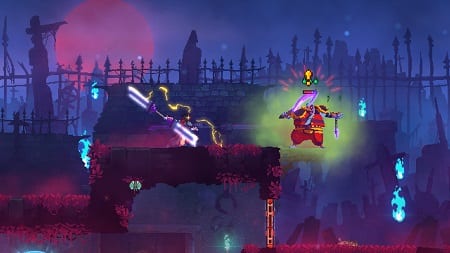 Even after nearly a decade of covering video games, and the copious amount of contacts, emails and press releases that come along with it, we can still get blindsided every now and then. Such is the case with Dead Cells, a rogue-like offering from developer Motion Twin, which makes its console debut with nearly unparalleled style.

It’s hard to overstate how good it feels to play Dead Cells. You’re given two slots for weapons, melee or ranged, and two slots for grenades and traps. From there you’re free to equip anything you find, and though you’ll undoubtedly have your favourties, it’s a testament to the game design that everything feels viable — something you’re more or less forced to learn since weapon drops, locations and even starting equipment (eventually) are randomly generated.

You’ll also have a double jump, a downward stomp and a defensive roll, and the way those things combine make your movement downright mesmerizing. There’s such fluidity to everything, and in one of the developer’s best decisions you can roll through enemies, meaning you take no physical damage from contact. That creates scenarios in which you’re constantly transitioning from one move to the next, avoiding damage while inflicting plenty of your own.

In the same way that a lot of old-school games (which had completion times that were a fraction of modern fare) became about not just beating them, but making it look cool along the way, Dead Cells has an undeniable style that emerges as you become more comfortable. Whereas initially you might tackle enemies in a very straightforward manner, subsequent runs will see you turn their demise into sport as you come up with new and interesting ways to end them.

Holding it back from top marks is the fact that run after run, no matter how good we became at playing the game, we’d find ourselves shooting in the opposite direction we wanted to. Perhaps it’s a controller sensitivity issue, but it just kept popping up at inopportune times, turning what should’ve been a freezing arrow to a charging foe into a harmless shaft sent thudding into an adjacent wall. We just couldn’t get clear of it.

There’s no shortage of games on the indie scene harnessing the bygone 16-bit era, but few have done it more effectively or endearingly than Dead Cells. The 2D world is grim or morose yet still implements lots of colour from its diverse enemy selection and various graphical flourishes as you pound the ground or wade through multiple foes with a sword.

Only seeing the game in action can do it justice, however, as the true visual accomplishment of Dead Cells is how incredibly fluid every action is. You’ll roll off a ledge, slam down on an unsuspecting enemy, finish him off with a sword, turn quickly and shoot a freezing arrow into a second foe before casually tossing a pair of traps to the level below and watching them make short work of a patrol. It’s both fun and addicting.

Although the audio doesn’t stand out in the same way as the graphics, the original soundtrack is still pretty damn good. Considering how often you revisit the same areas it’s impressive that we never felt the music becoming repetitive or annoying.

In Dead Cells you’re a headless prisoner that’s come back to life and is now trying to make his way through the prison. While there are small bits of story to be found within the levels, the game’s narrative feels inconsequential and is treated as such. As it stands, however, the gameplay hook is so strong the lack of context isn’t missed.

Things begin simply, you open a door, pick up two of three available items (initially a basic sword, bow and shield) and head off into the prison. Each foray is meant to be different thanks to procedurally generated levels, mixing up the layouts, item placement, exits and pretty much everything else. Some elements remain the same — enemy types populate the same areas, levels are roughly the same size — but it helps things from becoming repetitive.

A Metroidvania setup is also at work in the form of runes, which, once obtained, grant access to previously unreachable areas. Although they add another element, only the spider rune, which allows you to climb walls, has a moment-to-moment impact on how you play the game, so in that way the implementation is a bit underwhelming.

Despite Dead Cells‘ stumble with the runes, it pretty much nails everything else. Combat and exploration are exhilarating, and the rewards are metered out nicely. Basically, as you kill enemies some will drop cells. These are then used at the conclusion of levels to unlock new abilities, equipment and more. If you’re killed before reaching the end of a stage, however, you lose them all.

Each time you reach the end of a level you’ll also be able to add a mutation (up to three) that work as buffs, increasing your hit points, reducing cooldown times, increasing ammo and so on. Any weapon you’re carrying can also be improved and/or gives the option to reroll its status effects (burn, poison, bleeding).

Still, what makes each run through Dead Cells interesting is that what you have access to is random. Just because you’ve unlocked an awesome blade doesn’t mean it’ll show up in a given playthrough, and because of that you’ll learn to make do, shifting tactics based on what weapons and traps you have at your disposal.

Ultimately, each run not only makes you more powerful by finding new blueprints, adding more weapons and the like, but it’s also making you better by forcing you to adapt. When it all comes together with the proper setup, and you’re loaded with hit points, taking out the game’s bosses makes for a great time.

Excellent design and ultra-smooth gameplay combine with a steady challenge to make Dead Cells one of the year’s best games.

By HC Green
Tags: Dead Cells, Rogue-Like, Video Game Review
This entry was posted on Wednesday, August 29th, 2018 at 5:37 pm and is filed under Herija Green, Video Game Reviews. You can follow any responses to this entry through the RSS 2.0 feed. Both comments and pings are currently closed.