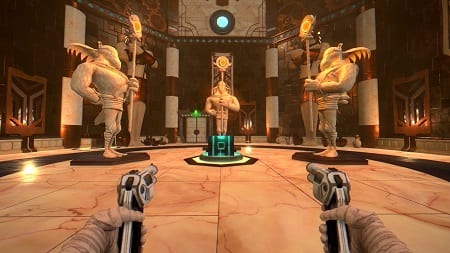 Immortal Redneck, the second title from fledgling developer Crema Games, takes a decidedly old-school approach to the first-person shooter genre in terms of action while also adding elements of the more modern craze of “Rouge-likes.” It’s an interesting blend grounded in solid game design, but there are some notable misfires as well.

In terms of premise, the game is patently ridiculous as a vacationing redneck (that’s you) dies in an accident only to come back as a mummified immortal doomed to scale ancient pyramids in a search for answers. Now granted, shooters aren’t generally a hotbed of storyline brilliance, but we still could’ve gone for a little more depth in that area.

Of course, in the world of Rouge-likes, or “Rouge-lites” in this case, the key is developing a hook in the gameplay that’ll keep you coming back after each failed run. On that front, Immortal Redneck does a solid job, allowing you to spend all the cash you collect on your most recent run to purchase upgrades and abilities (any unused money is sacrificed to re-enter the pyramid, though, so brush up on your math skills).

Each run is procedurally generated, shuffling around rooms and enemies to challenge your survival skills as you look to ascend the three pyramids. For the first several hours odds are you’ll meet with limited success, forcing you to turn you hard-earned loot into things like more health, increased damage and, as your level increases, additional skills. The constant feeling of progress helps offset any frustration stemming from repeated failures.

Eventually you’ll become powerful enough to start advancing further into the pyramids, and it’s here the game’s reliance on scrolls is likely to split gamers. Scrolls contain random status affects, some of which are good (improved crits, better defense, more ammo), some of which are bad (move slower, no crosshairs, ice physics). You won’t know what they do until you pick them up, and at times the negative effects will effectively ruin your run, which is a shitty hand to be dealt.

Redneck‘s reliance on random encounters can also kill runs as the game will sometimes fill rooms with enemies to take down, and then not have the decency to have them drop a sufficient amount of ammo. With no de facto melee strike you need bullets to take down foes, and it’s pretty frustrating to be left high and dry in that department.

Although the core shooting mechanics are solid, it’s worth noting that the game fares much better on a TV versus playing on the Switch’s screen. Even with the gyro function it’s hard to be precise in handheld mode, especially at range, and switching weapons with the d-pad isn’t as smooth as we would’ve liked. Great handheld first-person shooters is a damn short list, and unfortunately Immortal Redneck doesn’t handle well enough to add its name.

Visually, the game has a certain colourful charm with its ancient Egyptian setting alongside a diverse roster of baddies, offering up enough variety to adequately fuel dozens upon dozens of bite-sized trips through the pyramids. The audio is largely forgettable with mostly grunts and groans emanating from your character.

While by no means a great game, Immortal Redneck has its charms, offering sustained progress at a reasonable time investment for each trip through the pyramid. If you’re looking for a solid FPS you can circle back to at your leisure, this fits the bill.

By HC Green
Tags: Crema Games, Immortal Redneck, Video Game Review
This entry was posted on Tuesday, May 1st, 2018 at 7:46 pm and is filed under Herija Green, Video Game Reviews. You can follow any responses to this entry through the RSS 2.0 feed. Both comments and pings are currently closed.