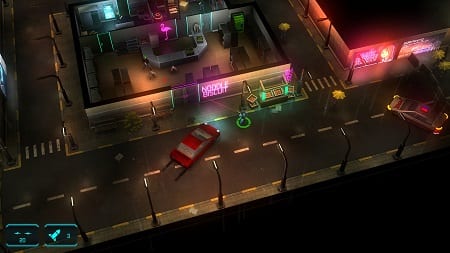 There’s a lot of pink in the future.

One needn’t squint very hard to see the influence of Judge Dredd (more the 2012 version than the old Sylvester Stallone one) on developer 10tons Ltd.’s newest twin-stick romp, Jydge, which casts you as an empowered enforcer of the law. So let’s saddle up and take to the streets to see what it’s like to be judge (er, jydge), jury and executioner.

Everything controls crisply, allowing you to weave between projectiles and dispense justice with your “gavel,” a weapon that can be customized to fire different types of primary (right trigger) and secondary (left) ammunition. While the shooting is good, melee strikes lack precision and satisfaction in equal measure, offering no controller feedback and a subdued on-screen animation.

Locations are varied, both in design and feel, creating unique neon-soaked cyberpunk settings to mow down criminals. Destructable walls and objects are smartly implemented, allowing for strategic use, though there are times it’s unclear whether cover is being provided, which can be annoying. It reuses some of Neon Chrome‘s assets, but Jydge‘s visuals are still a strength.

On the other end of the spectrum is the soundtrack, which is comprised of generic techno music that we found annoying enough to play the game on mute after less than an hour. Some might enjoy that style of music, but suffice to say it wasn’t for us.

Outside of a handful of “Neon Channel” news segments there’s no real plot to Jydge, and as a old-fashioned twin-stick shooter it doesn’t need it. Basically the streets are riddled with crime, traditional law enforcement methods are ineffective and the Jydge initiative has been introduced to deal with the riff raff. Got it? Cool, let’s get to the action.

For starters, progression here isn’t exactly linear. That isn’t to say you can skip missions, but completing one doesn’t necessarily unlock the next as everything — and we do mean everything — is achieved by earning medals. Each mission will have three goals to earn said medals, and as you go you’ll unlock harder difficulty settings that carry their own three-pronged objectives.

What this means is that you’ll be replaying the same levels repeatedly as goals are often at odds with one another. For example, you might be tasked with finishing in 20 seconds, freeing all hostages and killing all enemies. Obviously you cannot complete the second and third objectives while also extracting in 20 seconds.

Some will doubtless find this method annoying as it forces you to do adopt specific strategies (stealth, speed) that may not be in line with their preference. We mostly enjoyed it, however, and with only 18 unique levels on offer the need to play each one several teams is clear. Some actions, such as unlocking doors or killing secondary bosses, carry forward, making it easier to complete future runs through a level.

A sizable collection of suit and weapon mods also become available as you earn medals, though you’ll still need to shell out cash to purchase them. You’ll end up with four suit mods, three gavel mods and a secondary weapon, while ammo effectiveness can be boosted as well. There’s a nice mix of abilities, allowing you to go balls out, low profile or pretty much anything in between.

Jydge provides a steadily increasing challenge, and it does an admirable job of mixing up primary objectives so that stages feel different — patrols challenge you to survive for X amount of time, hostage extractions don’t require you to kill anybody, target missions task you with taking out specific enemies and so on. Granted, there are moments when chasing a particular medal gets tiresome, but it doesn’t happen nearly as often as you’d think.

When it does occur it’s usually in trying to complete one of the more specific medals, typically related to taking no damage or not being seen. The damage one is mostly in your control, at least as far as dodging goes, though getting caught on some piece of unseen cover is an issue. Stealth is overly temperamental with enemies bordering on clairvoyant at times — it’s also an odd choice to force on gamers in a traditionally action-heavy genre such as this.

Although it doesn’t deliver a ton of content, Jydge does a good job of mixing challenge, variety and flexibility to create a twin-stick experience that’s well worth your time.

By HC Green
Tags: 10tons Ltd., Judge Dredd, Jydge, Nintendo Switch, Video Game Review
This entry was posted on Wednesday, January 3rd, 2018 at 5:03 pm and is filed under Herija Green, Video Game Reviews. You can follow any responses to this entry through the RSS 2.0 feed. Both comments and pings are currently closed.