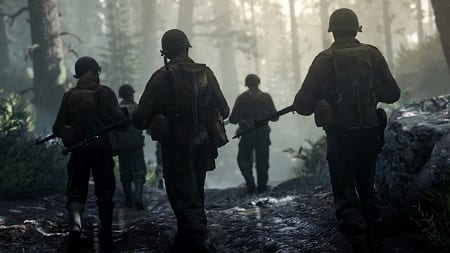 WWII takes us back to the past.

After nearly a decade of mostly alternating between the Black Ops and Modern Warfare storylines, Call of Duty is returning to its World War II roots with developer Sledgehammer Games’ second full-fledged release, Call of Duty: WWII. The franchise, which has steered clear of its initial source material since 2008’s World at War, is hoping that time away has made gamers’ hearts grow fonder.

There’s no noticeable change in the core mechanics, and that’s just fine considering the precision and satisfaction of shooting is one of CoD‘s biggest strengths. Heading back to the 1940s strips away all the gadgetry that’d infiltrated the series in recent years, presenting a more focused experience where your guns and grenades are pretty much all you have at your disposal.

As you’d expect, there are sections that break up the standard on-foot combat, tasking you with driving a tank, piloting a fighter plane, driving a jeep, manning artillery and more. They all handle well enough; though the jeep sometimes feels ungainly given the speed you’re moving and the limited field of vision. Aiming the flak gun can be a bit cumbersome, too.

WWII also implements some stealth as you’ll try to move through enemy territory silently without tripping an alarm, employing a meter that indicates enemy awareness. Like most first-person stealth it’s largely imprecise, and we ended up going loud much of the time; to its credit, the game doesn’t fail you if you’re discovered.

One item of note is how small the button prompts are during quick-time events (QTEs). They were legitimately difficult to make out on a 65-inch television, and that made us wonder if we were doing the right thing (pro tip: mash the button, don’t hold it down) to complete it correctly. There aren’t enough to affect the score, but they lean annoying nonetheless.

After lagging behind in the presentation department for a while now, Call of Duty has stepped it up with WWII, which is both the best-looking CoD title and World War II game ever made. The cut scenes have a gritty beauty a la Band of Brothers, and the in-game action looks dramatically improved from last year’s Infinite Warfare. There’s also a good mix of locations and seasons as you sweep across Europe.

Relative to recent entries Josh Duhamel is pretty far down the celebrity pecking order for a feature player, but he has ample experience playing a soldier and does a fine job as your Sergeant. The rest of the cast is solid as well, though they take a back seat to a strong original score and the powerful sounds of battle.

Call of Duty: WWII opens with PFC Daniels and his squadmates in the First Infantry Division storming the beach at Normandy and continues across a dozen missions (including the epilogue). The whole thing should take in the neighborhood of six hours to complete, though that will depend on your skill and what difficulty you’re attempting to tackle.

Returning to a grounded, reality-based campaign is a welcome change for the series, even if some of the missions don’t quite click. The story is a typical character-based tale within a massive war, attempting to make you care about the guys around you as well as the world’s overall plight. It does enough, but the constant acrimony with Sgt. Pearson (Duhamel) is poorly explained and grating.

There are some notable changes from other recent installments, not including the loss of all those futuristic gadgets. The first is the removal of health regeneration with the series rolling back the clock and requiring health packs to recover. The second is that your squadmates offer assistance via a meter that loads as you play, allowing you to request medkits, ammo and more.

Series purists should welcome the return of health packs, though there are times on harder difficulties when you can get in trouble by reaching a tough section short of medkits. Your squad’s assistance can certainly be helpful, but they’re not always around, and even when they are you have to track them down to solicit their services. That aspect can be annoying.

Multiplayer dials back much of the fluff that’s been accumulating over the years, eliminating things like perks, double jumps and running along walls. The simplification of movement and return to real-world weaponry is a welcome change and creates a more realistic version of combat. Sure, there’s bound to be some cheesing and exploitation, but we found it surprisingly refreshing.

While much of what you’ll see will be instantly familiar — many of the modes as well as the basics of the progression system and unlocks for starters — WWII brings a few notable additions. That includes an all-new hub world known as headquarters where you can snap up orders and contracts (to be completed for rewards) or do things like test weapons and play classic Activision games.

Perks have been tied to the new Divisions, which are essentially focused play styles (infantry for all-around combat, mountain for long range) that level up independent of your overall rank. There’s also WWII‘s new multiplayer mode, War, in which teams alternate attacking or defending positions across a multiple objectives. You’ve likely seen similar modes before, but that doesn’t hinder the fun when you get a couple evenly matched teams.

Nazi Zombies is back, too, dishing out four-player co-op goodness. The story shades darker and less over the top than other entries within the mode, but the core experience of working together to try to unravel all of the opaque mysteries remains the same. You’ll pick between four pre-set roles and level them up individually. While you can play with random teams, it’s significantly better if you put together a dedicated group.

Activision was smart to hit the reset button with Call of Duty: WWII, the series’ best entry since Black Ops 2. It’s got a solid campaign, two loaded multiplayer modes and, as always, extremely satisfying combat.

By HC Green
Tags: Activision, Black Ops, Call of Duty: WWII, Modern Warfare, Video Game Review, WWII
This entry was posted on Tuesday, November 14th, 2017 at 4:39 am and is filed under Herija Green, Video Game Reviews. You can follow any responses to this entry through the RSS 2.0 feed. Both comments and pings are currently closed.