Video Game Review: The Flame in the Flood 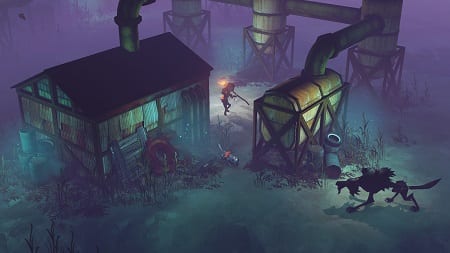 First released in early 2016, The Flame in the Flood has since made stops on various platforms, most recently the Nintendo Switch. While we missed it the first couple of times around, we finally got a chance to check out developer The Molasses Flood’s debut effort.

Most of your time will be spent foraging, exploring and crafting, but there are times you’ll need to avoid predators or navigate the river. When on water you’ll fight the current, steering your raft in whatever direction you wish to go along with the ability to adjust more forcefully at the cost of your stamina. At times it responds quite well, though at others it can be frustrating, leading to damage.

On land you move at a fairly slow clip with a stamina-draining sprint available as well. It’s fine for when you’re just looking around, but when the time comes to face off with wolves or boars, it makes you feel nearly helpless — and yes, we get it, it’s not an action game, but still, give us something to work with. To that end, shooting arrows is best left for when you’re standing somewhere enemies won’t come (like around a campfire).

Crafting presents a few frustrations as well, though not structurally. These stem from the small amount of storage available to you, forcing a constant game of shuffling items between your backpack, the satchel on your dog and the raft’s bin (only accessible when you’re close to said raft). At least the game could’ve stacked items the dog is carrying when you get them, rather than requiring a manual transfer.

Lest this all these issues make it seem as though the game is difficult to control, it really isn’t since most of the time you’re not doing things that require precision or alacrity. It’s just that things could’ve been cleaned up when those attributes are needed.

There’s a unique and mostly enjoyable presentation at work here, buoyed by an excellent soundtrack from Chuck Ragan. It features ample twangy guitar and plenty of vocal performance as well as you make your way down the river. The graphic style is unique and holds up well both full size and on the Switch’s screen, but the fixed camera and sometimes excessively dark nights can make it tough to spot potential threats and items to forage.

There are two modes to choose from in The Flame in the Flood: campaign and endless. While the former adds some rudimentary story elements (and that’s probably being generous) along with the challenge of making your way through a set number of zones, both are basically the same. Your goal is to scavenge and manage your resources in order to survive.

It’s not exactly a unique concept, but it’s generally well implemented. The crafting menu is simple and plays out as it should, allowing basic items to be built initially and then being used to collect items that can be employed to create more complex stuff. You’ll also encounter deadlier obstacles as you proceed, like predators and extreme weather.

While it initially feels satisfying — even when death knocks and sends you back to the beginning (you can continue from the last completed zone in campaign) in rougelike (or roguelite if you prefer) fashion — it doesn’t take long to spot the game’s biggest flaw. It’s a procedurally generated world, and with that comes the random collection of items.

What that means is that on one playthrough you might locate the means to create bandages and medicine early, whereas another trip might leave you out of luck well into your run. Although it does make sense to keep shuffling the deck for players so that there’s something new to experience, without a baseline of items you’re dependent on luck to survive.

Sure, that’s probably realistic, but in a punishing survival game like this it feels unfair to watch big chunks of time lost as you succumb to wounds you couldn’t heal simply because you hadn’t come across the ingredients yet. With no in-game economy or viable trading options, it’s entirely up to the game whether or not you find what you need.

That’s a shame because Flame is well crafted, requiring you to maintain hunger, thirst, body temp and sleep meters along with any injuries or illnesses you incur. That leads to decisions as to resource use as well as which islands to land on in search of items. It’s tremendously satisfying when you kill a wolf with a trap, cook the meat for sustenance and use its fur to craft a warmer coat.

In fact, we found the whole thing addicting and endearing enough to push through the frustration and returning even after our untimely demise cost us hours of playtime. Ultimately, though, as good as it is, there are some fundamental tweaks that could’ve made it even better. If The Molasses Flood can make that happen we’re in for a sequel.

Interesting game mechanics and a solid presentation make The Flame in the Flood a good get for anyone that enjoys survival-style games, though the procedurally generated world creates frustrations when you aren’t given the items necessary to endure.

By HC Green
Tags: Nintendo Switch, The Flame in the Flood, Video Game Review
This entry was posted on Thursday, November 9th, 2017 at 6:37 pm and is filed under Herija Green, Video Game Reviews. You can follow any responses to this entry through the RSS 2.0 feed. Both comments and pings are currently closed.