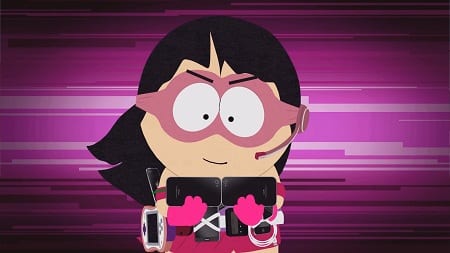 There was a lot of questions surrounding 2014’s The Stick of Truth based largely on delays and changes in publisher, but it proved to be worth the wait. Its sequel, South Park: The Fractured but Whole, carried no such worries and looked primed to build on the original. Does it deliver another hilarious experience or leave its fans wanting more?

There are three basic elements at work here: exploration, turn-based combat and mini games. In the former you amble around the town of South Park, search for goodies and engage in mostly rudimentary puzzle solving. Your interaction is fairly limited — you can throw fireworks, call on buddies and unleash various fart types — and handles smoothly.

Combat is equally straightforward with each party member having access to three unique abilities, your collection of consumable items and a super move that can be used when the corresponding meter is filled. Select a move with trigger timed taps of the “A” button that will buff its potency if done right. That’s all fine, but the taps are repetitive and fall within a small handful of patterns.

Most of the mini games revolve around your ass. As you progress you’ll unlock different type of farts that can be used in exploration or combat as well as the aforementioned buddies that will allow you to pass specific obstacles. Toilet mastery asks you to mimic a number of different controller inputs, and some of the higher difficulty dumps can test your fingers’ dexterity.

While South Park‘s ultra simplistic visuals don’t come close to matching what the gaming industry can do, The Fractured but Whole gets top marks for its spot-on recreation of the TV show. Outside of combat it’d be easy to mistake the game for the show, and the amount of fan service packed into the town is impressive as there are nods to past episodes and gags everywhere.

Creators Trey Parker and Matt Stone voice all the usual characters, ensuring Cartman, Stan, Kyle and the rest sound just right. Some of the racial stereotyping would seem out of place in other games, but with two decades of showing again and again that nothing is off limits in South Park it feels par for the course. Also big credit for keeping the dialogue funny over the game’s 20 or so hours.

Like its predecessor, The Fractured but Whole casts you as the customizable “new kid,” who has recently moved to South Park and is hanging out with the local children. It begins with Cartman traveling through time to fix the future… by having everyone dress up as super heroes. There are two rival factions: Coon and Friends and Freedom Pals, setting up a Marvel/DC dynamic.

At the heart of the rivalry is the desire to launch a film franchise, and with a $100 reward being offered for a missing cat, the two groups set out to find the animal and collect the money to get their franchise off the ground. Naturally, the missing cat feeds into a larger mystery that the kids find themselves increasingly entangled with.

It’s a fun story, and the superhero dynamic leads to great cosplay — Timmy as a Professor X rip, Wendy as Call Girl and so on — with plenty of options for creating your own persona (filling out your character sheet is a big part of the game). The game also takes shots at dozens of other topics, such as the rise of PC culture, Trump’s election, intolerance and much more.

In addition to a strong story, The Fractured but Whole also spices up combat, allowing your character to choose freely between the abilities of multiple classes to tailor your strength to the three people in your party. Abilities focus on dealing damage, inflicting negative status effects or healing, and though all characters bring something to the table there’s no doubt some are better than others.

Fights start out pretty basic as you’ll battle groups of sixth graders along with the odd boss battle, but it’ll sprawl from there and soon there’ll be ninjas, crab people, bums and four-assed mutants to deal with. If you value a challenge you’ll want to ramp up the difficulty, as on the default setting it’s rare to be pushed by any random encounters.

There are no weapons or armour to keep track of, but you will unlock slots to hold artifacts that increase your power, health and other attributes as you level up. It’s a very streamlined way to make leveling important while not requiring you to spend time constantly equipping the newest stuff.

Although combat is mostly enjoyable, there is a few annoyances. A couple fights feel way beyond any others in the game, creating the odd difficulty spike, and the battles in which the game changes rules on the fly (to represent the kids cheating) can be frustrating. The “grossed out” status effect also seems massively overpowered relative to the others.

Exploring the town itself feels a little less fresh this time around, losing some of the novelty that the original possessed. There’s repetition to the process as well as you enter a building, open all the drawers, use the toilet and look for some hidden item(s) that most locations have. The puzzles are never clever enough to require much thought, either, which is a bit of a missed opportunity.

One other minor complaint is the lack of waypoints and/or objective markers. Without them you’ll need to toggle the map frequently and deal with the smallish font. The little lettering also makes it easy to miss some of the jokes related to the items you pick up — they’re sorted in general crafting materials after you get them — and the Coonstagram posts.

South Park: The Fractured but Whole is easily the funniest video game since Stick of Truth, and the sequel capably expands on the original with better combat and more stuff to do.

By HC Green
Tags: Cartman, Matt Stone, South Park, South Park: The Fractured but Whole, Stan, The Stick of Truth, Trey Parker, Ubisoft, Video Game Review
This entry was posted on Wednesday, October 18th, 2017 at 12:14 pm and is filed under Herija Green, Video Game Reviews. You can follow any responses to this entry through the RSS 2.0 feed. Both comments and pings are currently closed.